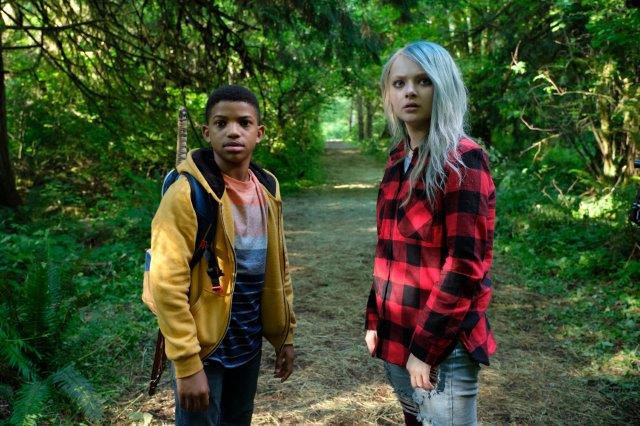 Actor David Oyelowo already is somewhat of a treasure. The Golden Globe, Screen Actors Guild, and Image Award-nominated actor (who rarely phones it in) now can add director as his ever-growing list of superpowers in his directorial debut The Water Man: a simple coming of age/fantasy/adventure/drama centering on a young man and his family as they deal with their terminally ill mother.

The Boone family recently has moved into a new mountainous town for a calm and simpler life. Young son Gunner (Lonnie Chavis of This Is Us fame) is somewhat reclusive. He’s young, but incredibly talented as he is constantly drawing his own personal graphic novel about a cop investigating his own murder. While he spends most of his free time drawing his story, there are substantial issues in his family that he’s now old enough to be aware of. His mother Mary (Rosario Dawson) is terminally ill with leukemia. While his father Amos (David Oyelowo pulling double duty as director and actor) being a Navy vet, puts on a tough front, he ends up alienating himself from his sensitive son. Both Amos and Gunner don’t know how to really deal with Mary’s condition, and can’t communicate with each other at the same time.

Because Gunner loves living in the world of fantasy, he starts hearing about the legend of “the water man,” an urban legend in the new town about a miner who found a way to cheat death after a devastating flood who lives somewhere in the woods. The urban legend is mostly told to scare young kids, but instead, it gives Gunner hope. If the water man can keep himself alive and immortal, why can’t he save Gunner’s mother? After learning a great deal from local expert Jim (Alfred Molina) and listening to young girl Jo (Amiah Miller) say that she has seen the water man deep in the mountainous woods, he sets himself out on a quest to try and find the legend so that he can save his mother.

While it appears that Jo is just trying to con Gunner for some cash, she agrees to go into the woods with him in search for the urban legend. Taking his father’s samurai sword and getting food and supplies for the general store, Gunner and Jo head into the woods. While the two aren’t necessarily friends (having just met each other), they strike a deal to look out for each other as they go off on this adventure, and soon enough, the two of them become friends.

Oh, Gunner just happened to not tell his father or mother about his little adventure. After he doesn’t come home after a day, his parents are desperately worrisome and start engaging the town and the local sheriff (Maria Bello) for help in finding their son. This causes them to do some soul searching themselves. Mary wonders if she should have helped prepare her son for the eventuality of her passing away and Amos realizes he needs to have a better connection with his son. But first, he has to find him and save him and Jo from the wilderness.

One thing that makes The Water Man very interesting is that the film operates in a strange grey area in regard to the storytelling. Is the water man real? Or is he a figment of a young man’s hope and imagination? In a similar way to Pan’s Labyrinth, you spend most of the film wondering those two questions until you receive a definitive answer. By that point, it’s not a matter of if the water man is real or not, it’s the journey that Gunner, Joe, and the rest of the Boon family has gone through that makes The Water Man worthwhile.

This being David Oyelowo’s first directorial film, it’s rather impressive. One key thing that happens throughout the film is the use of good old school animation to display certain narrative aspects of the film. Keeping in line with the idea that Gunner is a graphic artist, some fantastical components of The Water Man are broken down into beautifully animated sequences. Speaking of beautiful, the cinematography is incredibly beautiful. Being that the whole film takes place in a mountainous area, the scenery is incredibly beautiful and it’s quite surprising by the lack of CGI in the film. Towards the end of the film, there is a small amount of CGI used to display certain fantastical aspects of the film, but it doesn’t feel “cheap” either.

In addition to being a great-looking film, The Water Man also is able to deliver some outstanding performances from the cast. If anyone’s been crying their eyes out for the past 6 years watching This Is Us is already aware of what Lonnie Chavis can do acting-wise as Young Randall. Oyelowo is able to pull a great performance out of Chavis for The Water Man as well as this is pretty much his film. The same goes for Amiah Miller as Jo. Fans will remember her as the mute Nova in 2017’s War for the Planet of the Apes, but in The Water Man, she actually gets to talk and emote. As the film progresses, you learn more about Joe and her tragic story as well and she also delivers a great performance. While Rosario Dawson spends most of her time bedridden, she also delivers. And as stated before, Oyelowo rarely phones it in, especially when he is directing himself.

The Water Man has a great deal of heart, soul, and incredible performances, especially from its young leads. While there is a little bit of formulaic drama attached to it, the film’s a unique film that blends plenty of genres into a meditation on family and the trauma of sickness, and the hope of trying to resolve it.

The Water Man is currently available on VOD.

‘A Lot Of Nothing’ Trailer: Racial Tensions Run High In New Thriller From Exec-Producer David Oyelowo