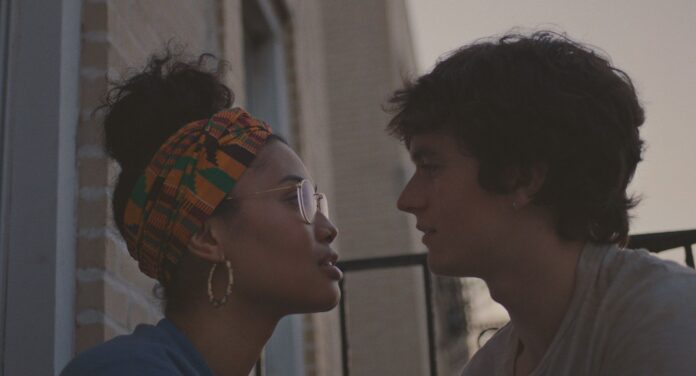 Port Authority is not your “fresh off the bus” New York story. Paul (Fionn Whitehead) is a 20 year old recently paroled kid hoping to stay with his half-sister while he gets settled into the city. Not much is revealed about his life before, but when she rejects him, he ends up staying at a halfway house at night and working for deportation services during the day. Longing for something more, he stumbles into a drag ball one night where he meets Wye, a young transwoman. Taken by her calmness, beauty and kindness, Paul slowly becomes enamored with her, despite the clear homophobia of the man who is currently providing for him. As they grow closer, their relationship starts to threaten the little stability he has.

Fionn Whitehead, best known for Black Mirror: Bandersnatch and Dunkirk, plays Paul with a quiet and violent sensitivity. He teeters beautifully between a purposefully infantile and an overwhelmed teenager trying his best. Whitehead, who is best known for playing intellectually complicated British characters seamlessly transitions into the pathos of Paul. Never overdrawn, it’s a performance that’s layered and enticing despite the character being awkward to watch at times. Whitehead is slowly becoming a young character actor to watch.

Leyna Bloom, a former ballet dancer, is a star in the making. As Wye, brings feminine light to the film. Like Paul, we breathe a sigh of relief when she is onscreen, as her presence perfectly balances out Whitehead’s performance. Bloom doesn’t play a queer savior of color to Whitehead’s ‘angry confused white boy,’ but as a dynamic, full-fledged person with a whole life of her own. While writer and director Danielle Lessovitz does keep the story to Paul’s perspective and bubble, she shows us that you can do that and still write characters of marginalized demographics with agency, even if they are not the primary focus.

Port Authority is a strong first feature for Lessovitz, who wrote 2017’s Mobile Homes with Imogen Poots and Callum Turner. Radiating with the same raw realism and authenticity of last year’s Never, Rarely, Sometimes, Always, Lessovitz rightly does everything she can to get the audience’s heart beat on the wavelength as Paul’s. Unlike the inspirational, joyous and even melodramatic portrayals of New York City’s ballroom culture (I’m looking at you, new season of Pose) that we are used to seeing lately, Lessovitz shows us a grounded, realistic side of ballroom culture. While beautiful and enticing, we still see the whole experience as an outsider, through Paul’s eyes.

Quiet, at times brutal, but always honest, Port Authority feels like a truly American love story. Not a stereotypical queer film, it’s rather an honest portrait of one of the many colors love comes in.

Port Authority is currently playing in select theaters and On-Demand June 1st. Watch the trailer below.