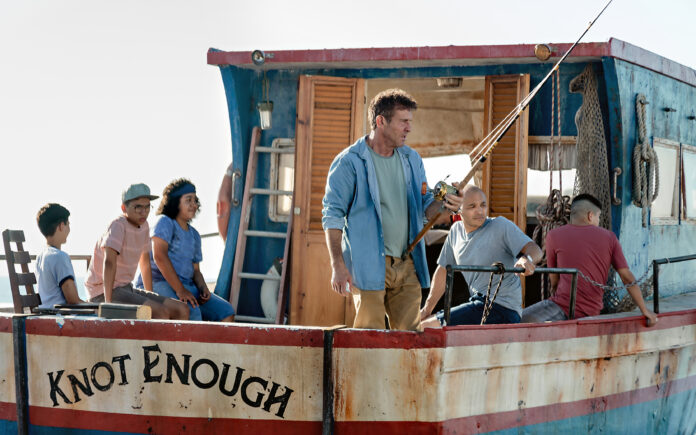 Sometimes hokey and cliché can be a good thing. Like in this week’s Netflix release, Blue Miracle. It tells the true story of an orphanage based out of Cabo that enters a high stakes deep sea fishing competition in order to save itself. While Chris Dowling and Julio Quintana’s script brings the corniness and stock characters you’d expect from a sports based true story, Quintana’s direction and charming performances from a young cast save it from drowning in the inspirational biopic pool.

Omar (Jimmy Gonzales, Mayans M.C., Lodge 49) is an overwhelmed man in his 30s running an orphanage with his wife out of Mexico’s ultimate tourist destination for the rich and famous, Cabo Saint Lucas. He willingly brings in any kids who need help despite not having the funds to do so. Down on his luck grumpy fishing boat captain Wade (an oddly method Dennis Quaid) who had won the Bisbee Black and Blue Fishing Tournament twice before, reluctantly teams up with Omar and a few of his boys to catch a blue marlin and hopefully win the fishing competition to pay off a bank loan and use the rest to fix up the orphanage. Over three days of competition, people’s perceptions and truths are questioned at the gang tries to catch a big fish.

The best part of Quintana’s direction is that none of the performances, including the kids’, are too heavy handed. Gonzales brings a charming youth group leader quality to Omar that doesn’t feel weighed down or overdone. Though he leads the film, he lets other characters do their own thing and plays off of them rather beautifully.

Quaid on the other hand starts out Blue Miracle playing a caricature of Captain Quint from Jaws, that feels a bit goofy in the beginning. However. once he is working with the kids on the boat, we see “dad Quaid” grace the screen, a character we haven’t really seen from the actor in a long time since the early 2000s. It’s a nice cameo, one that I wish was a bit more consistent throughout the film.

Leading the rag tag group of orphans are Anthony Gonzalez (Coco) and Nathan Arenas (Diary of a Future President). Both bring oodles of charm to their roles and expert comedic timing and delivery. Lines don’t feel kitschy coming out of their mouths, a feat for child actors in an inspirational film.

As a director, Quintana does go very hard with the blue motif, everything is painted and everyone is dressed in shades of blue to the point that we know a character is significant if he is wearing another color. Despite this, he uses some pretty creative and beautiful shots to tell this story. Overall, Blue Miracle works pretty well for something that could easily feel derivative.

You can watch Blue Miracle on Netflix. Watch the trailer below.