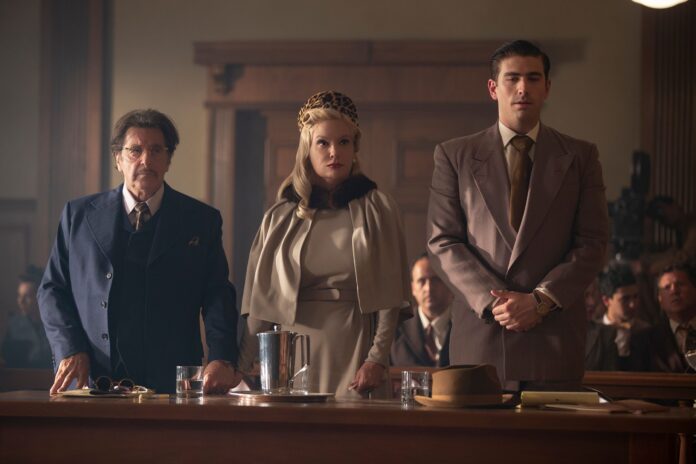 There are countless tales that emerged from WWII. Many have been shared with the world through film. Some filled with heroism that have patriotism shining through and others on the other end of the spectrum. American Traitor: The Trial of Axis Sally highlights one of the most infamous figures from WWII. Mildred Gillars (Meadow Williams) was an American born in the early 1900s who eventually made her way to Berlin. She studied art and drama and dreamed of being a professional actress or singer. While in Berlin, Mildred was in a relationship with Max Otto Koischwitz (Carsten Norgaard). It was Max who approached her with the opportunity of a lifetime in 1941. Through her vanity, Max convinced Mildred that she would be a star if she became the voice of Berlin radio and essentially the Nazi party. 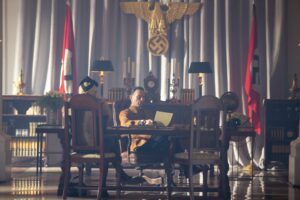 Max takes Mildred to meet Joseph Goebbels (Thomas Kretschmann), who was the chief propogandist of the Nazi party. Goebbels reiterates to Mildred the power of spoken word and how important her role would be. He would provide her scripts 24 hours in advance and she wasn’t to deviate from them in the slightest. Mildred spent the next several years broadcasting Nazi propaganda to American troops, trying to discourage them. Through her efforts she was dubbed Axis Sally. Mildred managed to survive the war and was eventually captured and brought to Washington D.C. where she was tried for 8 counts of treason. The only person willing to defend her was the notorious attorney James Laughlin (Al Pacino). With the help of a legal aide, Billy Owen (Swen Temmel), the two set out to clear the name of one of the only living faces of the Nazi party. 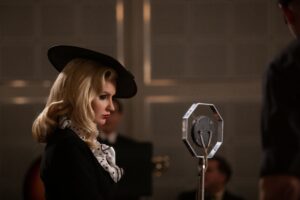 American Traitor: The Trial of Axis Sally is based on the book Axis Sally Confidential by William and Vance Owen. Vance Owen helped pen the screenplay along with Darryl Hicks and director Michael Polish. This group was able to capture the look and feel of the 40s. While the wardrobe and set designs helped, it was the music that truly solidified the atmosphere of the era. Polish also mixed in real life footage as well as newspaper headlines to remind the audience that this was indeed based on a true story.

Polish blended flashbacks from Mildred’s time serving in the Third Reich with her trial. This directorial choice helped not only make the narrative flow better but also shed light on what Mildred went through and how it was referenced in the trial. The audience is able to see the rationale behind her actions and how perceptions can change over time. Mildred was oddly  both loved and hated by troops during the war. Once it was over, many wanted her to hang for her perceived crimes. With Hitler and other prominent faces of the Nazi party dead, much of America’s hatred was focused on her.

American Traitor: The Trial of Axis Sally can unfortunately never find its footing. It toes the line of being a war drama and a courtroom drama, but never satisfying either. Much of the film drags on and Polish makes some questionable decisions with the direction of the narrative. There are certain characters who are highlighted, while others not, that make the film not reach its full potential. Pacino delivers a decent performance as the cooky defense attorney Laughlin. His courtroom antics provide some comic relief and there is a scene or two that are vintage dynamite Pacino. However, these moments are not enough to carry the film. The story of Axis Sally is interesting enough to merit a movie, unfortunately American Traitor: The Trial of Axis Sally squanders the opportunity. When the dust settles, it is a slow and forgettable drama that you can go ahead and avoid.