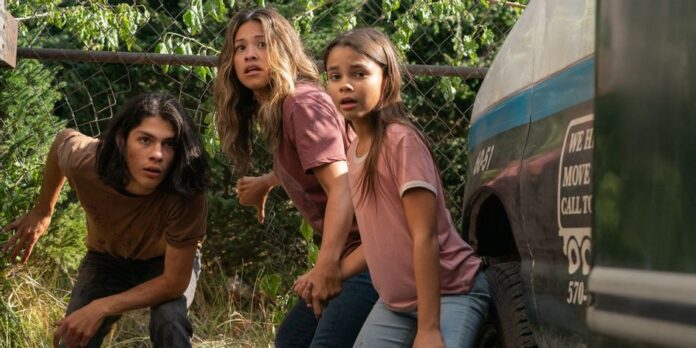 Disaster movies come in all shapes and sizes of global catastrophe. Sometimes it’s an exploding volcano, a crashing asteroid, nuclear fallout, or monsters that affect the senses. In the case of the upcoming Netflix thriller Awake, it’s a lack of sleep.

Gina Rodriguez stars as a soldier who may hold the key to a cure when chaos breaks out in the aftermath of a global event that wipes out all electronics, rendering humanity unable to sleep.

The cast also includes Ariana Greenblatt, Barry Pepper, Jennifer Jason Leigh, Shamier Anderson, Finn Jones, and Frances Fisher. Really good group here, with a few who have been under the Netflix umbrella for a while. Leigh had a role in Annihilation, Jones was the guy who used to be Iron Fist, and Anderson was just seen in Stowaway. Rodriguez recently starred in the Netflix comedy, Someone Great.

Behind the camera is director and co-writer Mark Raso, in his first film since 2017’s Kodachrome. He and his brother Joseph Raso wrote the script based on an idea by National Treasure: Book of Secrets‘ Gregory Poirier.

“After a sudden global event wipes out all electronics and takes away humankind’s ability to sleep, chaos quickly begins to consume the world. Only Jill, an ex-soldier with a troubled past, may hold the key to a cure in the form of her own daughter. The question is, can Jill safely deliver her daughter and save the world before she herself loses her mind.”