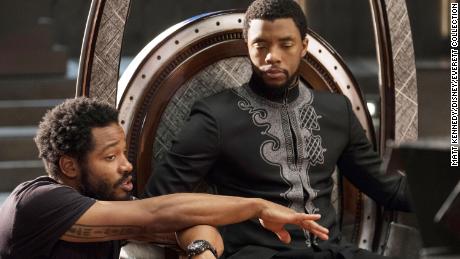 The entire world was devastated by the sudden death of Chadwick Boseman, leaving behind a short but profound legacy as an actor and as a good person. For those who worked with him closest and knew him best, that loss has been tough to overcome, such as Black Panther director Ryan Coogler. The sequel moves on without Boseman, and with Coogler having written a new script that moves on without T’Challa. Exactly how that happens, we have no idea, but Coogler explains to THR his decision to return and tell that story…

“It’s difficult. You’ve got to keep going when you lose loved ones. I know Chad wouldn’t have wanted us to stop. He was somebody who was so about the collective. ‘Black Panther,’ that was his movie. He was hired to play that role before anybody else was even thought of, before I was hired, before any of the actresses were hired.”

“On that set, he was all about everybody else. Even though he was going through what he was going through, he was checking in on them, making sure they were good. If we cut his coverage, he would stick around and read lines off-camera [to help other actors with their performances]. So it would be harder for me to stop. Truthfully. I’d feel him yelling at me, like, ‘What are you doing?’ So you keep going.”

I feel like Coogler is getting asked this same question a lot. He said pretty much the same thing in another interview just a couple of weeks ago. Questions about the absence of Boseman are understandable and that set is going to be incredibly emotional. I just hope there’s a time when Coogler is allowed to just make the best movie he can and honor Boseman in the way he sees fit.