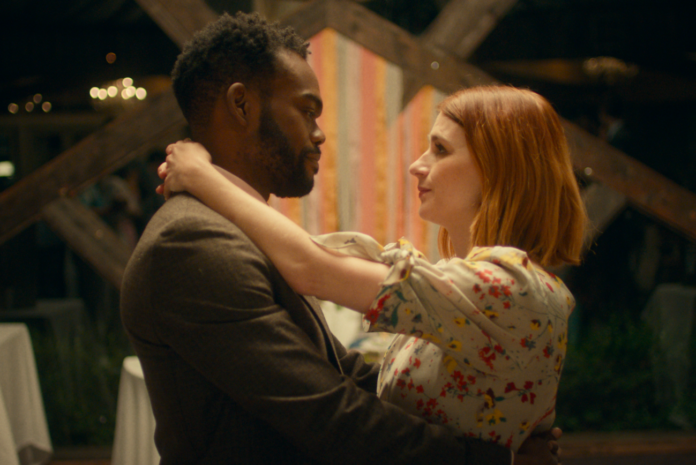 It’s very rare in a break-up movie for both sides to be portrayed sympathetically. Something Great, Forgetting Sarah Marshall, and even Midsommar all portray breakups from one viewpoint, maybe even evolving into romance with someone else. For anyone who has or has been dumped, the experience definitely feels one-sided but as many a therapist will tell you, it rarely is. In comes the new film We Broke Up. Co-written by Jeff Rosenberg (The Good Place) and Laura Jacqmin (Grace and Frankie), the romantic comedy is a refreshing take on the break-up film, giving us some of the most relatable and realistic romcom characters in years.

The film opens with Lori (Aya Cash, You’re The Worst, The Boys) and Doug (William Jackson Harper, The Good Place, Midsommar) clearly in love, flirting and waiting for their take out order. The ten-year relationship seems to be going strong until Doug asks Lori to marry him, causing his girlfriend to vomit all over the Chinese restaurant’s floor. Needless to say the couple breaks up, but not before deciding that the two will still go to Lori’s sister’s wedding together and act like everything is fine.

As romantic leads, William Jackson Harper and Aya Cash know what they’re doing. Both have played imperfect partners in the past, with Harper on The Good Place and Cash on FX’s You’re The Worst. While the both actors infuse a bit of those past performances into these new characters, both Cash and Harper ground them more in reality. It’s hard not watch them and relate to them or see someone you know in them. You end up rooting for each to succeed in whatever their hearts desire.

The key to that dynamic might be We Broke Up’s script. While both actor’s elevate Jacqmin’s and Rosenberg’s work, this female/male writing duo demonstrate how to write dynamic couples, creating a sympathetic balance. Infusing hilarity with universal understanding, the dialogue tricks you into watching a loving dissolution of a relationship. Instead of being cringey or hard to watch, Lori and Doug story isn’t a tragedy but an empathetic grown-up version of a romcom.

Jacqmin and Rosenberg, who also directs, know that a story centered solely on these two characters would be utterly depressing. Instead they smartly derive a majority of the film’s comedy from a stellar supporting cast of character actors. Sarah Bolger (The Tudors, Mayan M.C) plays Lori’s love struck sister with comedic timing and grace. Playing her boisterous husband to be is Tony Cavelero (The Righteous Gemstones, Mircale Workers). Cavelero brings a wise warmth to what starts out as goofy doofus fiancé archetype. Giving one of the most moving speeches of the whole film, Cavelero proves he has more to offer than just the funny sidekick.

While We Broke Up isn’t groundbreaking or revolutionized the genre in any way, it is a smart, well-crafted eighty minute film.  Even with a clever script and smooth direction from Rosenberg, the layered performances are what makes this film a pleasant surprise.  If you are looking for a movie with a little substance that’s not too heavy, We Broke UP might be your perfect match this weekend.

You can catch We Broke Up in theaters and on-demand. You can view our interview with director and co-writer Jeff Rosenberg and co-writer Laura Jacqmin here. Watch the trailer below.