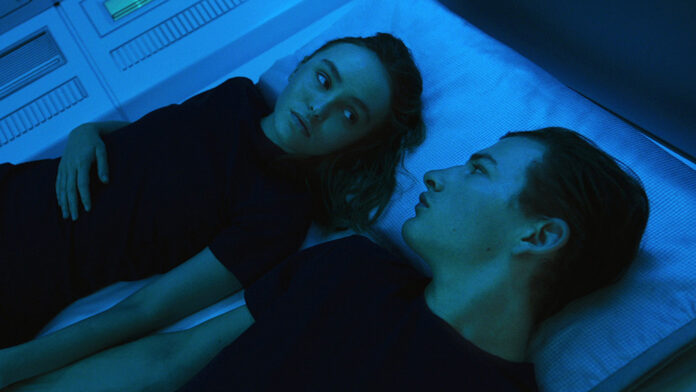 There’s a reason Lord of the Flies is so enduring and is taught to kids in schools at an early age. It’s a timeless story about the nature of man, but also untamed youth and the poisonous effects fear, jealousy, and ego can have on a civilized society. Every generation gets their version of this story, and Neil Burger offers his own with Voyagers, which takes the same basic premise and rockets its unruly youngsters into deep space with Colin Farrell as their lone guardians. It’s an intriguing sci-fi premise that teases something more salacious than actually delivers, but Burger guides his cast of rising stars through familiar terrain like a pro.

The trick is that Burger knows exactly what Voyagers is. We could break it down to shorthand like “Lord of the Flies in space”, and that would be totally accurate. There’s nothing wrong with that as long as it’s more than a surface level recreation. It speaks to the strength of William Golding’s novel that it can be  reimagined, taken out of an island jungle and transplanted into the future aboard a starship without losing much of its impact. The problems lie in some of the execution and the sanitized nature of a story that should be off the friggin’ chain with chaos.

The year is 2063 and, naturally, humanity has screwed up Earth so bad it needs to find a new planet to call home. When one is found, brilliant minds conjure up the idea of genetically breeding children for the 86-year voyage aboard the Humanitas. Farrell, who at one point in his badboy career would’ve been a ridiculous choice to play anyone’s chaperone, is Richard Alling, the guy in charge of this desperate mission. He’s meant to watch over the children, keep them safe, trained, and prepared to repopulate when the time comes.

Here lies the key: the passengers aboard the Humanitas aren’t meant to reach the destination. It’s their grandchildren who will reap the benefits of their sacrifice, and that is where Voyagers gets very intriguing on multiple levels. The kids, who are made docile by the blue Kool-Aid they drink every day, mature into obedient young adults, dutifully doing their tasks and admiring Richard as their father figure. But they never asked for this responsibility. They have this one life and they don’t really get to live it, they’re sworn to this obligation they won’t even see the rewards of. Is that fair?

Well, not to everyone aboard when they discover the truth about their blue drink. The responsible Christopher (Tye Sheridan, always the responsible one) and his wild-eyed cohort Zac (Fionn Whitehead) don’t think so, and they stop drinking it, encouraging others to do so, as well. What’s next is predictable. Hormonal kids are gonna be hormonal kids, ya’ll! Soon, they’re both lusting over the comely Sela (a reserved Lily-Rose Depp)…”You look different!” and wrestling like WWE superstars to the fascination of the others. It isn’t long before tragedy strikes, battle lines are drawn, a rock gets dropped onto Piggy’s head…oh wait, that’s a different story, but you get my drift.

Shot in cold, blue-white sterility, Voyagers presents a peak utopian society, one where virtue is cultivated artificially as if to keep man’s baser instincts locked away in the cargo hold. It makes a terrific counter-balance to the second half of the film when things go half-cocked, reports of killer aliens spring forth, and people start getting killed. Production values are top-notch, done with the kind of simple efficiency that would’ve made sense for this time period and for this mission.

Burger is a veteran filmmaker who knows how to deliver entertaining mainstream content with the barest hint of an edge to it. He directed the Bradley Cooper smart-pill thriller Limitless, and the first chapter of the Divergent franchise. There was also the catchy magician thriller The Illusionist, and somewhat controversial military drama The Lucky Ones, a personal favorite. However, Burger takes on material that pushes too far, and Voyagers is no different. Sex between the passengers is teased mightily in promos but is only a suggestion in the actual film. Instead, we get a crazy flash of hair-raising, animal-attacking images to hint at the swirling emotions of those who are experiencing them for the first time. Why is a movie about sexual awakening and revolt playing it so safe?

Farrell gets the most to work with here, proving once again that he is one of our best actors even in a role that’s not really meant to shine. I think we forget how good Farrell is when showing his sensitive, kind-hearted side, and Richard is someone who has sacrificed his own happiness to be a protector for kids he doesn’t even know. He has all of the emotional attachment of a parent but the burden of knowing his “children” have a dire fate ahead. Sheridan, Depp, and Whitehead are the only actors who get anything of significance while rising stars such as Viveik Kalra (of Blinded by the Light), Chante Adams (Roxanne Roxanne), Quintessa Swindell (Black Adam), and Isaac Hempstead Wright (Game of Thrones) do little but blend into the mix.

Voyagers is more efficient than exemplary, which pretty much describes Burger’s filmography to a tee. Even as the film devolves into a fairly standard thriller, with one group of fanaticized future-leaders hunting down another, it remains totally watchable and committed to mirroring moments established in Lord of the Flies. Cinematographer Enrique Chediak (Bumblebee) even manages some cool time-lapsed imagery as the years zip by. As the time speeds through, rushing us through the hallways of the Humanitas, you can’t help to feel Voyagers could’ve done more than simply mimick Lord of the Flies, but to give it some exploration.