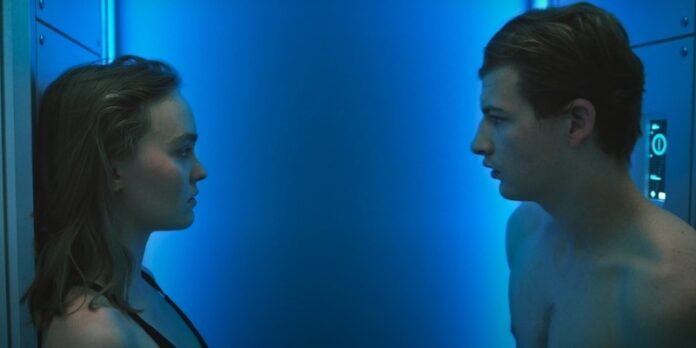 From my decades of movie-watching, I’ve learned many things. One of those is that if you have a group of rowdy young people with limited or no supervision, terrible things happen. I’ve seen Lord of the Flies. I’ve seen Battle Royale. This is just the way shit goes. And that’s what happens in the upcoming film, Voyagers, except this time it’s in outer space.

Featuring an intriguing cast of Tye Sheridan, Lily-Rose Depp, Fionn Whitehead, Colin Farrell, Chanté Adams, Isaac Hempstead Wright, Viveik Kalra, Archie Madekwe, Quintessa Swindell, and Madison Hu, Voyagers centers on a group of specially-bred young men and women who are set into space to colonize a distant planet and secure the future of all humanity. Of course, you put this many young people together and shit starts to get primitive real quick.

The film is directed by veteran filmmaker Neil Burger, best known for Limitless, The Upside, Divergent, and a movie I absolutely love, The Lucky Ones.

Voyagers was originally to open last November, but will now arrive on April 9th via Lionsgate.

With the future of the human race at stake, a group of young men and women, bred for intelligence and obedience, embark on an expedition to colonize a distant planet. But when they uncover disturbing secrets about the mission, they defy their training and begin to explore their most primitive natures. As life on the ship descends into chaos, they’re consumed by fear, lust, and the insatiable hunger for power.