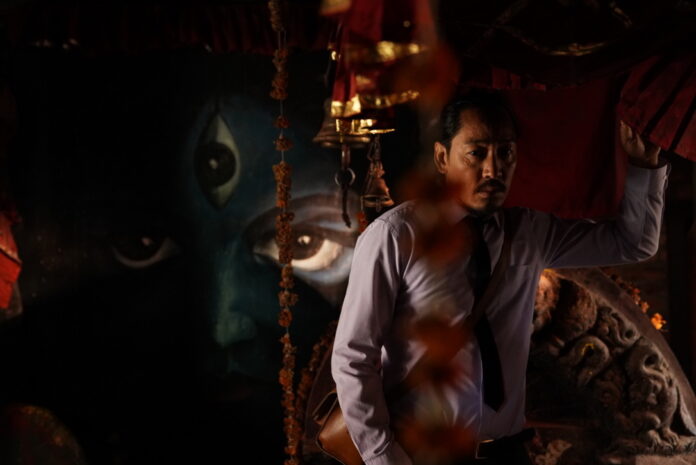 In Looking For A Lady With Fangs And A Moustache, a young man living in Kathmandu must deal with the reality that because of a curse, he will die in a week. You may think a story like this would be set long ago, but writer/director Khyentse Norbu spins a tale of modern day religious mysticism and the personal journeys we all must go through to reach enlightenment.

Tenzin (Tsering Tashi Gyalthang) is a ponytailed and  ambitious entrepreneur searching for the location of his new coffee shop, where he hopes to brew the best coffee in the country. While looking for potential spots in Kathmandu, he callously, and against the advice of his friend Jachung (Tulku Kungzang), rummages around inside an abandoned temple. Despite shrugging off the warning, Tenzin is soon haunted by his decision, experiencing mysterious visions while going about his routine. It doesn’t matter where he is – at band rehearsal, on his motorcycle, standing in his kitchen, green and yellow hued visions plague his everyday life. At Jachung’s urging, Tenzin meets with a prophet monk who informs him that he will die in a week as punishment. Unwilling to accept his fate, Tenzin consults a Buddhist master, who tells him the only way to live is to find and win the favor of a “dakini,” a wise female water spirit. Tenzin’s desire to live sends him on a wild goose chase around the city.

Director Khyentse Norbu infuses , with Tibetan lore and Buddhist philosophy, however he doesn’t spend much time explaining the mythology, expecting the audience to catch up on their own. This isn’t hard to do, but without a guiding hand from Norbu, you do feel like you are missing one or two important parts of subtext. A Tibetan/Bhutanese lama himself, Norbu is careful to not give too much away to his audience, wanting them to literally experience Tenzin’s experience with him and come up with their own answers.

Some of the side plots do get in the way of an already complicated narrative. Tenzin’s best friend Jachung’s hidden love for Tibetan singer and the complications that arise from that prove to be slightly distracting from Tenzin’s journey though that story line veers into romantic comedy territory. Norbu constantly breaks away from genre and while this choice works some of the time, with a confusing narrative, too many elements overcrowd the film.

Music supervisor Rachel Fox uses this concept with greater success. While the soundtrack is filled with traditional and calming Tibetan music, Fox takes the opportunity to throw some more unexpected choices at us including Tomas Mendez’s haunting Mexican standard “Cucurrucucú Paloma” and even a Tom Waits song. While each song may seem bizarre on paper, each one not only works with each scene it is featured in, but creates a cohesive flow as a full soundtrack.

The visuals feel decadent, the perfect complement to Fox’s music selection, luring the audience further and further into a trance. Cinematographer Mark Lee Ping-bing out does himself with Looking For A Lady With Fangs And A Moustache. Taking the already breathtaking Nepali landscapes, Ping-bing somehow squeezes every drop of color out of the riverbanks and mountains and dials its saturation up to eleven. The effect is mesmerizing, as if we are hallucinating and daydreaming along with Tenzin.