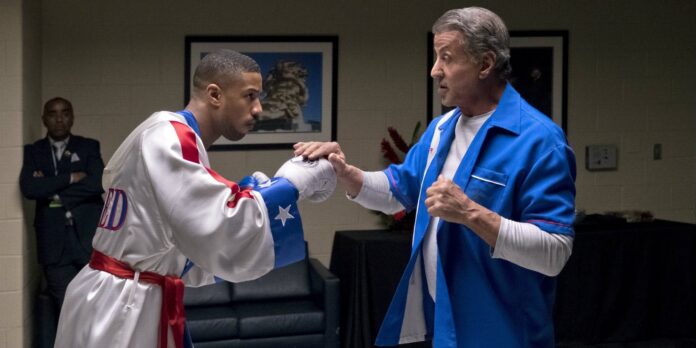 On a day that saw Sylvester Stallone joining with a certain twice-impeached former “President”, we’re learning about why the actor won’t be returning for Creed III. At least according to star Michael B. Jordan it has to do with the franchise moving beyond the iconic Rocky Balboa and putting its focus squarely where it should be, on Adonis Creed.

Jordan, who is making his directorial debut on Creed III, told IGN (via Yahoo)…

“I think that Sly let it be known that he wasn’t coming back for this one but I think, you know, his essence and his spirit… there’s always going to be a little bit of Rocky within Adonis. But this is a ‘Creed’ franchise, and we really want to build this story and this world around him moving forward. So, it’s always respect and always a shit-ton of love for what he’s built, but we really want to push and navigate Adonis forward and the family that he created.”

He continued, “Hopefully you guys will love what I’m thinking…what we’re cooking up. I think it’s going to be something special.”

While we know the Rocky story will never truly be over because Stallone continues to think of ways to keep the boxer going,  Creed II really buttoned things up nicely for him. Adonis Creed really served to be a way for Rocky to fill a void in his life, and that changed when he reconnected with his estranged son. Where the character goes now, who can say?

‘Creed III’: Jonathan Majors Will Slug It Out With Michael B. Jordan In Boxing Sequel

Michael B. Jordan On ‘Superman’ Rumors: “I’m Just Watching This One”