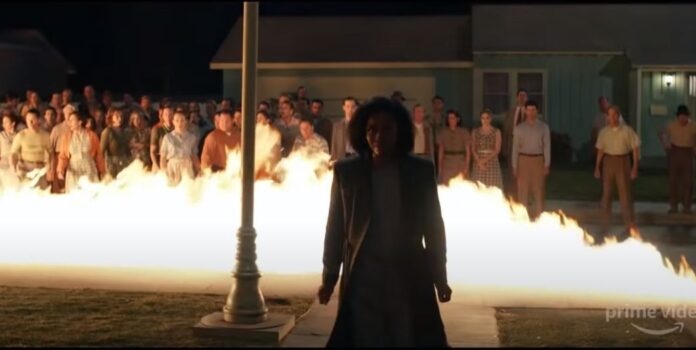 A few weeks ago we posted the official teaser for the new Amazon original series THEM. The series is the latest in a run of shows putting African-American families in supernatural scenarios pre-Civil Rights…as if just living wasn’t nightmare enough at the time. When the teaser was released it seemed that the family at the center of the story was faced with evil in two forms, the racist neighbors AND a supernatural entity. Well, today we have the full trailer for THEM and it seems to be pointing in the direction of a direct cause and effect relationship between the two. Yup, it wasn’t enough for the racist neighbors to just do unspeakably crappy things to the new family on the block, the trailer indicates that they summon the evil that plagues the family.

This season, titled Covenant, is the first of an anthology series set to explore the horrors behind the scene in America. Each season will explore a different topic, ala American Horror Story. I’m not sure how terrifying the show will be, though I’m getting a strong feeling it will not lack in the horror department, I am sure that this series is set to pull a LOT of emotional strings.

THEM is a limited anthology series that explores terror in America. The first season, 1950s-set COVENANT centers around a Black family who move from North Carolina to an all-white Los Angeles neighborhood during the period known as The Great Migration. The family’s idyllic home becomes ground zero where malevolent forces, next door and otherworldly, threaten to taunt, ravage and destroy them.

Check out the trailer below and look for THEM: Covenant on Amazon Prime, April 9th, 2021.