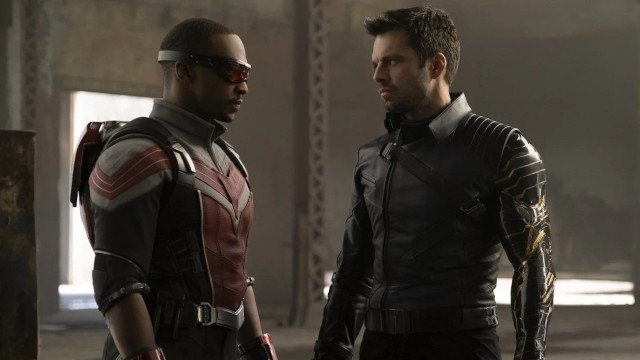 The Falcon and the Winter Soldier is in an unenviable position. Following on the creative highs of WandaVision, the series has to temper expectations while also giving fans the superhero action they crave. Good luck.

As we all know, Captain America’s legacy is going to be a key component of the six episode series, with Falcon (Anthony Mackie) and Bucky (Sebastian Stan) both worthy of carrying the shield. That’s going to lead to a lot of bickering as they try to take on a major threat.

I love that this new trailer opens up with Sam actually practicing with the shield, performing some of the acrobatic maneuvers that Cap made look routine. It shows that his being handed the shield hasn’t been ignored, while Bucky’s comments about how it “represents a lot of things to a lot of people” alludes to his own interest in the mantle. We can’t forget that Bucky was Cap’s oldest friend, and perhaps nobody wants to carry his best pal’s legacy forward more than him.

This dynamic between Sam and Bucky, one that is tense but also fueled by humor, might be enough to push this series beyond what we’re expecting from it. We’ll find out in just a few days.

The Falcon and the Winter Soldier arrives on Disney+ on March 19th.

All eyes are on the shield, as Sam Wilson, aka The Falcon, and Bucky Barnes, aka The Winter Soldier, decide to team up—or rather, work together—when a new global threat launches them into an unexpected mission that may hit too close to home.