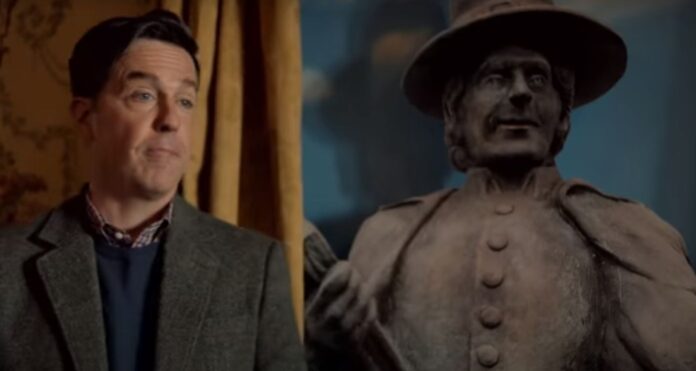 Ed Helms is heading back to TV – sort of. His new comedy Rutherford Falls, about the politics between an Northeastern small town and a nearby Native American reservation, is coming to Peacock.

The new show marks groundbreaking Native and Indigenous representation in comedic television with Jana Schmieding and Michael Greyeyes starring in the show and five Native writers on staff. Deadline describes Rutherford Falls as:

A comedy about two lifelong best friends, Nathan Rutherford (Ed Helms) and Reagan Wells (Jana Schmieding), who find themselves at a crossroads – quite literally – when their sleepy town gets an unexpected wakeup call.

Ed Helms, of course starred in The Office and Hangover franchise, will lead the series as a descendent of the town’s founder who’s world is turned upside down when the town statue is set to be taken down. Playing his best friend since childhood is Jana Schmieding, who is also a writer on the show and host of the Woman of Size podcast. Her Reagan Wells works in her indigenous tribe’s cultural center, located in a casino outside Rutherford Falls.

Everyone’s favorite Schitt’s Creek vet is also set to star in the series. Dustin Milligan plays Josh Cogan, a reporter and podcaster looking into the “goings-on” in Rutherford Falls.

Michael Schur is no stranger to small town politics having created Parks and Recreation and The Good Place. He will executive produce the series and serve as co-creator along with Helms and Sierra Teller Ornelas.