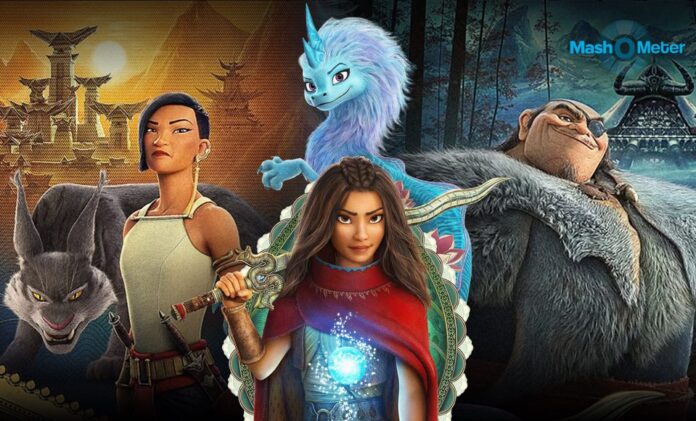 It’s interesting to me that Disney’s Asian-inspired princesses are also in the films that are the most action-heavy. It could just be cultural, as honor through combat is a central theme in many films across decades. Whatever the reason, I’m okay with it, and hope Disney’s Raya and the Last Dragon, an epic quest film with colorful adventure sequences, fights, and detailed representations of southeast Asia, is the first of many set in this universe.

Co-directed by Big Hero 6‘s Don Hall and Blindspotting‘s Carlos Lopez Estrada, Raya and the Last Dragon creates gorgeous, rich mythology surrounding the land of Kumandra.  Once the five lands of Heart, Fang, Spine, Talon, and Tail were as one, but 500 years ago a plague known as the Druun infected the land, turning everyone and everything it touched to stone. Only the combined efforts of powerful dragons stopped it, with the last dragon Sisu (Awkwafina) gave humanity a precious gem that could repel the Druun. Sisu disappeared, the other dragons remained in stone, and the people of Heart were entrusted to protect the gem.

In the present, Raya (Kelly Marie Tran) and her father Chief Benja (Daniel Dae Kim) are fierce warriors and guardians of the jewel. But the land has been ripped apart by conflict, and Benja’s attempts to reunite the clans ends in disaster. The gem is destroyed, with each leader stealing a piece for themselves before the Druun reemerged and turns Benja to stone.

The story picks up six years later with Raya a battle-hardened, traveling adventurer looking for Sisu so they can put the gem back together and save the world. The problem is that Sisu isn’t all the storybooks and legends cracked her up to be. She relied on her brother and sister dragons, and now she must learn to trust Raya if they’re going to work together on this quest.

Trust is a major theme throughout Raya and the Last Dragon, and all of the characters must learn to lean on others or overcome past betrayals. For Raya, she entrusted Fang princess Namaari (Gemma Chan), a girl much like herself in almost every way, only to be betrayed, leading to the disaster she’s now trying to stop. But Sisu thinks differently. She encourages Raya to trust more, saying “You’ve got to give a little to get it.” Ironically, Sisu is too trusting, which gets her into trouble she then needs the help of others to get out of.

Fortunately, Raya and the Last Dragon is full of funny, odd heroes who join on each leg of the journey. There’s Raya’s loyal pet armadillo Tuk Tuk, because there’s always a loyal pet for every Disney Princess. The river land of Tail is where they encounter Boun, a 10-year-old shrimping boat captain; Little Noi is a baby con artist with her own army of thieving monkey henchmen, and Tong (Benedict Wong) is a fearsome but kind-hearted warrior giant.

With the Druun rampaging unchecked, everyone in this motley crew have been impacted by tragedy. There’s an undeniable somberness to their mission, as the Druun, referred to as “a plague borne of human discord”, threaten to end everything if people don’t learn to trust one another. It adds a bit of dramatic heft as these characters face their respective traumas to battle against a common enemy.

Otherwise, Raya and the Last Dragon is a sweeping, swashbuckling, and wholly original fantasy picture, with combat styles pulled from many different disciplines. Raya’s whip sword does some serious damage, but even better are the hand-to-hand fights she has with Namaari who uses a Muay Thai discipline. Between this and Mulan we’re seeing Disney really step up the legitimacy of their battle scenes.

Comically, the dynamic between Raya and Sisu is pretty similar to other Disney films, and it does feel a little bit formulaic by Mouse House standards. Tran, who has a lot more to do here than Star Wars afforded her, captures Raya’s youthful spirit but also her warrior spirit. The casting of Awkwafina as the voice of Sisu is just so spot-on, though. The actress’s self-deprecating humor is put to perfect effect as the curiously awkward dragon who needs to trust in herself as much as she does others.

Disney really outdid themselves visually, as well. While we knew the film would be inspired by southeast Asia, they went all-out in making sure each land has its own personality, from the artificial waterways of Fang and the harsh, spiky interiors of Spine, to the desert land of Tail, and the bustling marketplace of Talon.

Raya and the Last Dragon is the latest to be released through Disney+ “Premier Access” for a cost of $29.99. Much like Mulan, it’s a film that would’ve been perfect on the big screen and perhaps someday we’ll get to have that. But for the comfort of your home, the film offers plenty of sword-swinging, high-flying dragon action that the entire household can enjoy for as long as they want.