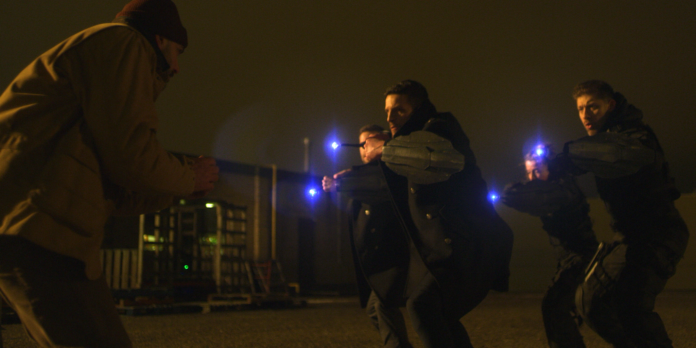 George Shepherd (George Tchortov) is a sergeant of a team working for a secret military project in Enhanced. There are mutants living amongst ordinary people and Shepherd and his team have been tasked with containing and incarcerating them. The goal is to protect the public as well as the mutants and avoid death on either side. Of course, that’s just a goal, the team is prepared to do whatever it needs to get the enhanced off of the streets. George has to manage the dangers of the missions with some trigger-happy soldiers under his command like Scott (Eric Hicks) – who would rather shoot first and ask questions later. 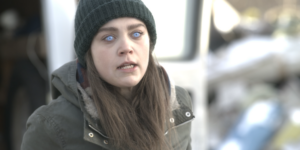 George has always blindly followed the intel they’ve received – the enhanced are dangerous and a threat to the public. His boss Captain Williams (Adrian Holmes) lets the team know that numerous enhanced have been found dead. The working theory is that one of their own is killing the rest off one by one. George and his team are to continue rounding up the enhanced but making sure to try and track down this potential serial killer.

After a few curious encounters with the enhanced showing signs that conflict with the intel, George begins to question everything. Especially after meeting Anna (Alanna Bale) – an enhanced who doesn’t seem to be a threat to people at all. Anna is simply lonely and tired of always having to look over her shoulder. She just wants a normal life, a better life. David (Chris Mark), the enhanced with sinister motives, sets his sights on Anna leaving George with a decision to make. Does he continue to blindly follow his orders, or risk everything to help her. 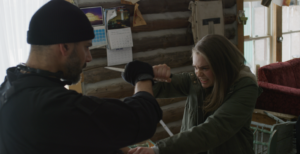 Director James Mark, who also cowrote the film with Matthew Nayman and Peter Van Horne, has a background as a stuntman and fight choreographer. His years working in these areas translate on screen in Enhanced. The fight scenes are by far the highlights of the film. They flow seamlessly and are choregraphed extremely well. It is interesting to see what “powers” the enhanced possess and what new tricks they pull out of their sleeves. Issues arise with the consistency however, where character’s strengths and abilities seem to waiver.

Enhanced would have been better served as a television series. There was potential to build an unique world with David’s quest at the center and introducing new enhanced characters as the show progressed. In the film’s current form it felt the opposite, diminished. We only got glimpses of the enhanced and mentions of others. We didn’t get to see all their attributes and their full potential. There was enough to pique your curiosity, but not truly satisfy it. When it’s all said and done, Enhanced is just another average Sci-Fi action film. There are a couple of neat moments, but it does not do nearly enough to set it apart from previous films of the genre. There are far better sci-fi movies out there and watching it won’t really enhance your life – you can pass on this one.