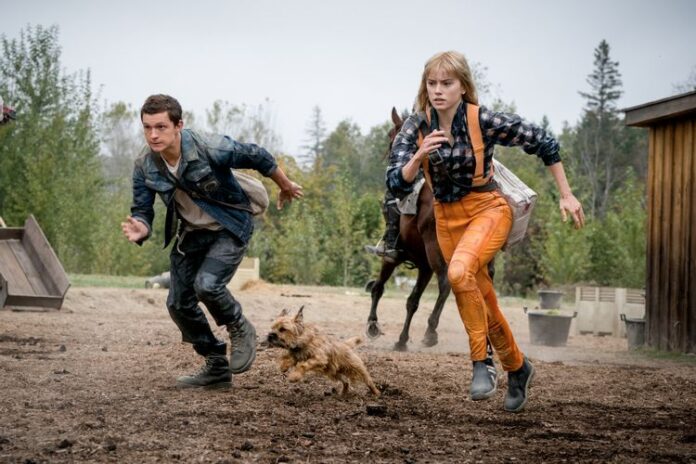 This past year has been no stranger to long-delayed films that have finally been kicked out into the wild. Chaos Walking is perhaps the oddest of them all, an adaptation of the first book in Patrick Ness’ The Knife of Never Letting Go series, it began life nearly a decade ago (!!!) when Charlie Kaufman of-all-people was hired to draft the script. Seriously? The writer infamous for cinematic mind-fuckery like Eternal Sunshine of the Spotless Mind and Being John Malkovich on a YA franchise? Get outta here! Well, many have come and gone since then. Many new scripts, a couple of directors, finally settling on Doug Liman, who waited so long to finish this he did something entirely different (HBO Max film Locked Down) in the meantime. His skills at big-budget action at least promised this wouldn’t be boring.

Well, yes and no. Chaos Walking is by no means breaking the mold of the YA genre that saw its peak years ago with The Hunger Games and The Maze Runner. The disappointment comes in the extraordinarily long wait for something that is, ultimately, fairly generic when there’s potential to be so much more.

Chaos Walking may be set in the far-off future, but its themes of privacy, misogyny and toxic masculinity are extremely relevant. In virtually every one of these young adult adaptations, there’s an all-powerful female who is the only one who can set the world right. Well, imagine that except there’s an entire village of men who hate outspoken women, and those same men can’t keep their ugly thoughts secret.

Tom Holland plays Todd Hewitt, and he, of course, is the exception. Like all of the other males in Prentisstown, Todd is afflicted by The Noise, which is basically unfiltered stream of consciousness. Every man’s thoughts rise out of their head like a cloud of smoke, for all to see. There are no secrets on this planet, a place the remnants of humanity occupied when Earth became inhabitable. There are also no women in Prentisstown, all of them supposedly killed by the planet’s native species. That includes Todd’s mother, but he is too young to remember that tragic day.

David Prentiss (Mads Mikkelsen) seems to be the only man alive who can control his Noise. He keeps it wrapped inside his head, or surrounded by literal walls that erect around his thoughts. As the mayor of Prentisstown, David is just about the only person Todd looks up to. That is until their entire world is upended by a crash-landing spaceship, and the arrival of Viola (Daisy Ridley), a thoughtful, resourceful, and tough female whose thoughts nobody can hear. Todd, who has never seen a woman in his life, is immediately smitten, and some of the movie’s best laughs come from his inability to control his feelings for her. Most of it is pretty innocent, like admiring her smile and hoping she’ll kiss him. When the other men catch wind of her existence, they set out to capture her, with Todd the only one who will help Viola escape.

Chaos Walking, despite its title, isn’t that chaotic at all. You’d be surprised given the troubled production, which suggested this would be a complete mess. But Liman is a filmmaker who has repeatedly made excellence out of embattled productions, with The Bourne Identity and Edge of Tomorrow two prime examples. He does the same here in putting together a competent, well-made chase movie, because that’s essentially Chaos Walking turns out to be. The men of Prentisstown are convinced Viola is a threat, none more so than an enraged cleric (David Oyelowo) whose thoughts emanate as burning flames.

As a thriller, Chaos Walking works when it makes the most of The Noise as a visual cue. Hiding from their pursuers becomes a problem because Todd’s thoughts can be seen by everyone, no matter where he goes. There’s also tension in his relationship with Viola, who has to deal with the horror of being able to see what every man thinks of her. And I don’t know if you knew this, but we dudes can be pretty cruel and disgusting.

It’s unfortunate the film doesn’t show us more from Viola’s perspective because she really is the most interesting character by far. There are only a couple of major female characters, the other being Cynthia Erivo’s iron-willed Hildy Black, leader of the peaceful Farbach settlement, who resent everything Prentiss stands for. The film does well to put both Viola and Hildy in positions of heroism, where they can show the smarts and toughness the aggro dudes in Prentisstown wish they had.

There just aren’t any surprises. Yes, the action moves crisply and there’s a terrific near-capture sequence set against surging rapids. We expect no less from Liman, while Holland and Ridley are no slouches at this stuff either.  As the film hurtles to a conclusion, the wheels start to come off a little bit. You can see where all of the complications may have led to the dropping of some storylines and character beats are dropped. Nick Jonas as Prentiss’ lame son is especially affected by this, but others feel like they were edged out at the last moment. Overall, Chaos Walking is enjoyable enough to have you anticipating Liman’s next big action movie, which will be an insane journey to space with Tom Cruise and Elon Musk. What the film doesn’t do is make enough of a case for there to be more. As an exploration of men who can’t hide their hatred towards women, it doesn’t do much but lead to a fight scene. And if that’s all Chaos Walking has to say, what makes it different than the rest? It makes you wonder what Kaufman’s continued guidance would’ve amounted to.