As much as I’m in the bag for Mortal Kombat something about the first trailer didn’t sit right with me. I got the same feeling I got watching the trailer for Ninja Assassin so many years ago. Something that said “This should be everything you’d ever want in a movie but it will be ruined by bad CG”. I certainly didn’t think 15 seconds of footage could change my mind, but here we are. The clip, which was released earlier today, is from what’s reported to be the films opening scene in which Hanzo Hasashi, the man who would become Scorpion, is attacked by Lin Kuei Ninja at his homestead. What follows is some beautiful shot, technically accurate, and visually sumptuous martial arts awesomeness, something that we just don’t see much in today’s blockbuster cinema realm.

That scene alone makes me long for a movie that will take full advantage of the deep and rich mythology that’s grown from Ed Boon and John Tobias’s ultra-violent creation. Seriously, if you’ve never taken a deep dive on the story behind MK’s characters I suggest a wiki trip soon. While a lot of it goes into deep fantasy territory one of the core stories, surrounding the franchises most compelling characters (the ninja of course)is grounded, powerful, and immense.

Of course, this close to release the gifts from the movie gods are plentiful, in addition to the amazing clip above we also have the below poster giving us a beautiful hi-res look at the main set of characters. 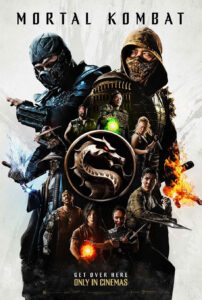