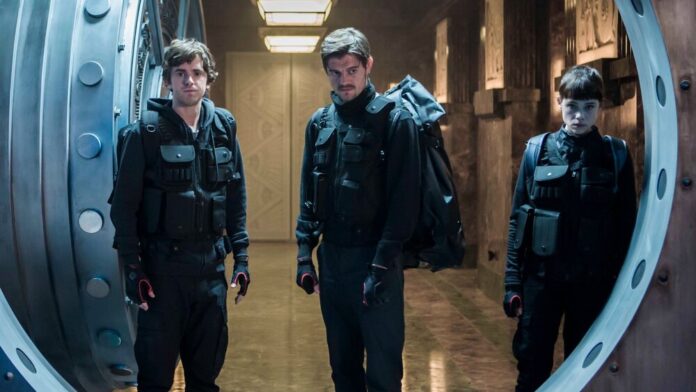 My chosen genre of choice will probably always be the heist movie. There are few things better than a good, exhilerating one with a colorful crew and an exotic locale. All of those things seem to be in place in the new film, The Vault, from [Rec] director Jaume Balagueró and a cast led by Freddie Highmore, Liam Cunningham, Sam Riley, Astrid Berges-Frisbey, and Famke Janssen.

Highmore plays a brilliant young engineer who gets hired by a grizzled master thief to break into a secret vault underneath the Bank of Spain, which is said to contain Sir Francis Drake’s fortune. All of this takes place against the backdrop of the World Cup, with the country distracted by the sporting event.

This looks great to me, even if it doesn’t aspire to be much other than a straight-forward heist flick. Balagueró is best known for his [Rec] horror films and I’m curious to see him in a totally different mode. The cast is a lot of fun, too, with plenty of franchise experience behind them. Highmore is a Golden Globe nominee who has starred in Bates Motel, Charlie and the Chocolate Factory, and currently leads ABC series The Good Doctor. Riley is one of my favorite actors best known for Control and a pair of Maleficent films, while Janssen helped slaughter the X-Men as Jean Grey in Fox’s movies. Astrid Berges-Frisbey starred in Pirates of the Caribbean: On Stranger Tides, I Origins (in which she’s really terrific), and King Arthur: Legend of the Sword. Cunningham played the loyal Davis Seaworth on Game of Thrones.  Hard not to like this bunch.