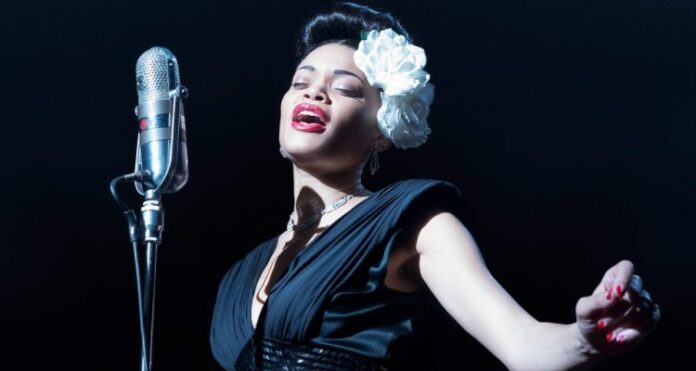 Lee Daniels’ The United States vs. Billie Holiday fits into a surge of films about Black activism in the pursuit of equal rights. While watching Daniels’ film about the late great “Strange Fruit” songstress, whose life was tormented by corrupt, racist officials in the FBI because of the anger her song aroused in others, I thought about One Night in Miami and the reluctance of another singer, Sam Cooke, to join the fight. It’s because of what people like Holiday went through that he knew what the costs of using his rare talent to speak out would cost, but also because of the way she fought back that artists like him had the strength to endure.

Unfortunately, The United States vs. Billie Holiday doesn’t fully live up to her sacrifice, despite a staggering, powerful breakout performance by Andra Day. The film, like so many by Daniels, is content to wallow in suffering, convinced that overwhelming grief equates to emotional resonance. It’s a practice Daniels has used consistently since the accolades heaped upon Precious, but the returns have been diminishing for years.

Holiday’s stirring, mournful ballad “Strange Fruit”, a lyrical metaphor for the lynching of Black people (the hung bodies are the fruit swinging from tree branches), drove J. Edgar Hoover and his agents such as Harry Anslinger (Garrett Hedlund) crazy because she dared to draw attention to the hangings being carried out all across America. In response, typical COINTELPRO activities sought to discredit Holliday in the press, and to bully her into not performing the song anymore. When that failed, they sought other means to destroy her, either by taking away her licenses to perform, thus being unable to earn a living, and when even that didn’t quiet her down, they turned her personal demons against her.

The film largely focuses on Holliday’s many vices, which include illegal drugs and the many men who would take advantage of her. Haphazardly employing an interview with a radio host as the framework, Holliday details the any ways the FBI made her life a living Hell. That included employing agent Jimmy Fletcher (Trevante Rhodes) to portray a lovestruck fan, easily worming his way into Holliday’s inner circle. He’s just one of many, however, who would encourage and enable Holliday’s drug use, which gives the feds all the ammunition they need to arrest her repeatedly.

Penned by Suzan-Lori Parks from a book by Johann Hari, The United States vs. Billie Holiday seems to have little to center itself other than “Strange Fruit”. When attempting to dig into Holliday as a person the movie doesn’t do much but show her as a drug addict and alcoholic who is too trusting with the people she loves. Rarely do we see her at her best, only at her worst, being taken advantage of our publicly humiliated. Occasionally, we see her lashing out at the friends who actually have her back, in favor of those who repeatedly have not. While the FBI are undoubtedly the villains here, Holiday is more often than not her own worst enemy.

And that’s a shame because her decision to keep singing “Strange Fruit” is so courageous, and a legitimate inspiration for generations of performers, that it deserves better treatment than it gets here. Daniels rightfully steadies his erratic direction when she performs the song, allowing Day to regale us with her stunning voice. You can’t help but wish she had better material to work with, one that shows the many dimensions to Holiday beyond her vices. There’s a passing reference to her bisexulaity and relationship with actress Tallulah Bankhead (Natashya Lyonne), but what does it contribute to who Holiday is? You can’t help but wish The United States vs. Billie Holiday had interest in why “Strange Fruit” impacted the country the way it did, that whites and blacks were willing to travel for miles just to see it performed? Why did Holiday feel it was her responsiblity to spread “Strange Fruit” as far and wide as she could, when so much of the country had proven they were unworthy of her talents? These things aren’t given the time and consideration they deserve, and thus there’s a better film about Billie Holiday that’s still waiting to be told.

The United Statesvs. Billie Holiday will be available on Hulu beginning Feb. 26th.

‘On The Come Up’ Trailer: Sanaa Lathan’s Directorial Debut Is A YA Drama Set In The World Of Battle Rap