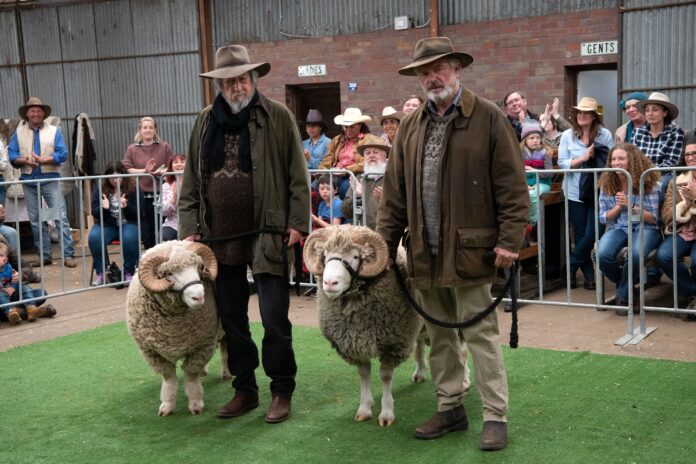 Its surreal watching Sam Neil’s new film Rams. Or should I say its weird that a movie about sheep farming is so relevant to our current world. Taking place in the Australian Outback, it’s the story of two brothers who have inherited an award winning sheep lineage from their father and now run separate farms. Estranged for forty years, the brothers, Les (Michael Caton) and Colin (Sam Neill) live in complete silence with each other until their entire town is shaken up when a highly contagious and debilitating wasting disease effects the sheep flocks of their entire region.

Who knew that a film about Australian sheep farming could be so timely. Quarantine, governments working against their citizens, wild fires, divisive family relationships literally dominate every current headline. Rams succeeds in layering these themes, focusing instead on the emotional toll losing their livelihood has on Les and Colin.

Based off of the critically acclaimed 2015 Icelandic drama of the same, Rams seamlessly transitions from the cold Icelandic climate to the hot dry Australian outback. It’s still infuses humor into character beats and the plot while slipping in the heartbreak of real life problems. Fellow farmers like Asher Keddie, Wayne Blair, and Will McNeill play the slightly quirky side characters we’ve come to know from Outback-set films like The Dressmaker and The Sapphires (which coincidentally Blair directed). Miranda Richardson plays the by-the book- vet who holds a torch for Colin, complete with purple hair. Richardson makes the most of what she is given to do, though the spark with Neill doesn’t seem to be there.

Neill seems at ease in his role as a sheep farmer, which makes sense as the New Zealander owns his own farm and vineyard in real life. Channeling a bit of his character in Hunt for the Wilderpeople, Neill creates an everyman everyone can get behind. Empathetic, stoic, and slightly unhinged, Neill’s Colin is the perfect character to get us through a film 20 minutes too long.

Playing against him as his brother is Australian character actor Michael Caton. Previously known mainly in Australia, Caton’s performance proves what a shame it is that he is not more widely known. He layers his performance as the often drunk Les with child-like hurt and anger. Caton’s control over his performance is masterful, playing off of Neill perfectly.

Director Jeremy Sims is smart to let Caton and Neill work their magic, using cinematography and music to compliment the performances. Though he is not afraid to add humor or the macabre to a shot, Sims direction is understated. He does falter in the film’s third quarter, when the pacing completely lags. However Sims made sheep farming seem important and captivating for most of a 105 minute movie which is no easy feat.

If you like a heartwarming, understated crowd pleaser and are familiar with the Australian film sensibility, Rams might be worth checking out. Though it has its flaws, it’s a pretty decent adaption of an Icelandic favorite.

You can watch Rams on-demand. Watch the trailer below.

‘Ted Lasso’ Interview: The Pre-Production Team Breaks Down How They Tackled Designing And Casting The Hit Show

‘Ted Lasso’ Interview: The Post-Production Team Discusses One Of The Show’s Most Important Characters – Sound