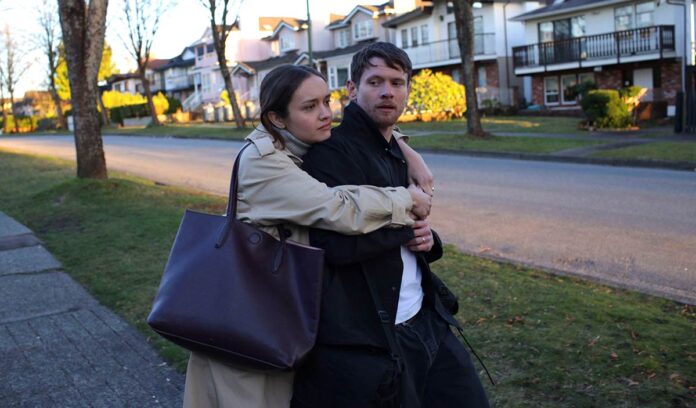 Little Fish, the thought-provoking, poetic sci-fi love story from director Chad Hartigan, is a pandemic movie that isn’t about the pandemic. Thank goodness. There have been enough of those already, with few gaining enough distance to have anything of note to say. But Hartigan’s film charts its own path while feeling timely and relevant, by exploring the nature of memory and shared experience when all of it is threatened with going away.

In that, Little Fish treads similar ground as another beloved romance about memory, Eternal Sunshine of the Spotless Mind. The major difference is, for all that it is an intimate story of one couple’s coping with an Alzheimers-like virus, is that this is, in itself, a shared experience with millions of others.

In the year 2021, the world is caught in the grip of a pandemic; the NIA, or Neuroinflammatory Affliction, causes its victims to lose their memories. Sometimes it happens quickly, which is a blessing compared to the ones who lose it slowly over time, the people they were evaporating before the eyes of their loved ones.  Understandably, a panic has broken out and people angrily fight to be the first to be part of whatever experimental trials they can find.

Away from the chaos, we’re introduced to Emma (Olivia Cooke), sitting alone on the beach. She’s in tears, but that changes a little when a dog runs up to her side. He’s followed by a man, Jude (Jack O’Connell), who smiles at her funny English accent. It’s like they never met but were always meant to.

Little Fish charts the course of Emma and Jude’s romance, the highs of which there are many, and the lows, many of which are caused by the virus. Hartigan directs from a script by Mattson Tomlin, the red-hot writer of The Batman. The screenplay bounces around in time, but easily tracks the contours of their relationship. They meet at a party. He’s a photographer covering a rock band led by his friends Ben (Raul Castillo) and Samantha (Soko, on a tear right now). Emma is a veterinary tech. She’s brainy, coming to a Halloween party dressed as French veterinary surgeon Claude Bourgelat. He’s a lot more street smart, rushing to Wiki who in the Hell this Claude Bourgelat person is so he can seem on her intellectual level. Emma catches him, jokes about it. He swoops in for a kiss. She’s spoken for, but doesn’t pull away. We like these two together. They’re fun.

But there’s the pandemic. It’s still out there, and we know the building of happy memories is tinged with the fear they could be short-lived. One of the questions Little Fish asks is whether we stop making those memories with that kind of threat looming? And, if those memories are somehow stolen away, does love still remain?

The film unfolds with subtle grace notes, especially the initial impacts of the virus. Ben gets it first. He can’t remember the music, and his lover/lead singer Samantha has to get it tattooed on his body. Around the world, people begin to forget how to drive. Pilots forget how to fly. Pet owners lose track of their animals, causing Emma to have to shelter and euthanize more of them.

We know that, eventually, it will strike Emma and Jude. Key life decisions recently made are forgotten, meetings are missed, one keeps a photo with the other’s name on it…just in case. While they are brought closer together in this heightened sense of urgency, rifts are also exposed. A global disaster doesn’t change who you are, and some bad habits are very hard to break. Bad habits can be deadly in a crisis.

As is so often the case, Olivia Cooke is the film’s emotional heart and soul, depicting Emma’s joy at finding the love of her life, building something real with that person, and the anguish of becoming barely a whisper in their mind. O’Connell captures Jude’s desperation to hold to the man he’s always been, because to lose Emma would be unthinkable, even if he couldn’t remember it.

While the film is stretched a little longer than it needs to be, there’s no denying this deeply moving look at the way our recollections form so much of who we are. Here’s hoping the pandemic theme doesn’t turn people off because Little Fish is one that shouldn’t be allowed to slip away from memory.