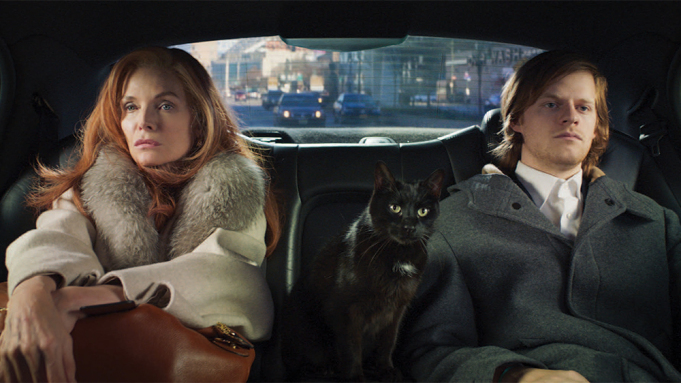 There are a lot of movies about rich, white privileged people. There are few films that make those characters relatable and empathetic. In French Exit, Michelle Pfeiffer manages such a feat. Her first role in years that feels worthy of her filmography, Pfeiffer, along with Lucas Hedges, makes the bourgeoisie seem likable, something nearly impossible in this current moment.

Based on Patrick deWitt’s critically acclaimed novel of the same name, French Exit chronicles a dysfunctional mother and son duo, Frances (Pfeiffer) and Malcolm (Hedges), who are still reeling from her husband’s death years later. When they run of out funds and cannot live in New York society anymore, they sell all their belongings and take their remaining cash to her friend’s place in Paris to live rent-free. The jobless and privileged Malcolm is currently in a relationship with Susan (Imogen Poots), though it feels strained due to his mother’s influence. They take their mysterious black cat with them as they embark on their move across the world on a cruise ship. As the move starts to take its toll on her, strange things start happening that don’t seem to bother Frances nor her son.

Pfeiffer, easily at her best, finds a way to make a rich privileged white lady seem empathetic and relatable. It feels like Lucas Hedges has always played a mommy’s boy. Well-suited to the part, Hedges brings a Wes Anderson-like frank yet miserable nature to the part of Malcolm Price, bookended by both mommy and daddy issues. (Coincidently, this is not the first film Hedges has spent on a boat with a Hollywood legend this Oscar season. He also stars in Let Them All Talk with Meryl Streep.)

When the dramedy does venture into the absurd, it feels like the natural order of things. Surrounded by beautiful Parisian architecture, with miserable characters, things are bound to go into the surreal at some point.

Director Azazel Jacobs is no stranger to the niche, dark comedy. In 2011 he directed Terri with John C. Reilly about a depressed fifteen year old boy who only wears pajamas. He directed The Lovers with Tracy Letts and Debra Winger as a married couple, who despite serious affairs, find a spark between them again. (Letts also voices a character in French Exit).Jacobs has always excelled at taking difficult and broken characters and finding a way to make them fascinating. Jacobs does that with Pfeiffer. Not afraid to take a beat of silence and explore the uncomfortable, Azazel, once again, milks his actors for all they’re worth.

Danielle MacDonald is wonderfully droll, bringing a dose of reality as Madeline, well as much as a cruise ship psychic turned pet psychic can. Always there to emulate the audience’s reaction, MacDonald’s facial expressions ground the piece, making her a joy to watch once again.

Another supporting player that stands out is Valerie Mahaffey as Madame Reynard. An over the top eccentric widow living in Paris, Madame Reynard knew and interacted with Frances back when she lived in New York City. Bringing a blunt and hilarious honesty to the part, Mahaffey utilizes her years of acting experience and channels it into the zany Madame Reynard.

Overall, the film would not be as surprisingly funny and moving as it is without its cast. Easily Pfeiffer’s best role in years, it’s thrilling to watch a professional do what they do best with extreme precision.

You can watch French Exit on-demand now. Check out the trailer below.