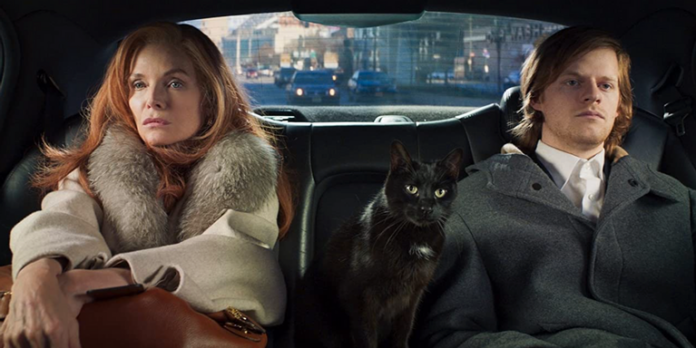 Michelle Pfeiffer has been so great for so long that we take her for granted. It’s been a long time since there’s been Oscar buzz surrounding one of her performances, not since the ’90s, but she has her best shot in years with French Exit, a dark comedy with a surreal edge.

Directed by Azazel Jacobs,  French Exit finds Pfeiffer as a formerly-rich widow who moves into her friend’s apartment in Paris with her adult son, played by Lucas Hedges. Also tagging along for the trip? Her cat, who just might be the reincarnation of her dead husband.

Yeah, it’s pretty weird. Jacobs is the filmmaker behind the 2017 romance The Lovers, and the black comedy Terri. His sense of humor is a bit off the beaten path and that’s why I’m excited to see what he can get out of Pfeiffer and Hedges on this one.

“My plan was to die before the money ran out,” says 60-year-old penniless Manhattan socialite Frances Price (Michelle Pfeiffer), but things didn’t go as planned. Her husband Franklin has been dead for 12 years and with his vast inheritance gone, she cashes in the last of her possessions and resolves to live out her twilight days anonymously in a borrowed apartment in Paris, accompanied by her directionless son Malcolm (Lucas Hedges) and a cat named Small Frank—who may or may not embody the spirit of Frances’s dead husband.