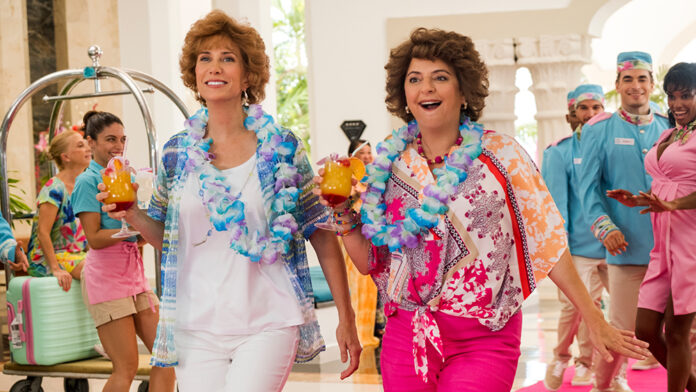 Before we begin, I want you to close your eyes and say “Barb and Star Go To Vista Del Mar.” If you can get through the phrase without smiling, congratulations you are officially a mundane adult without a silly bone in your body. If you did smile or even giggle, try saying it in a midwestern accent. Depending on your reaction to this exercise, the film version of Barb and Star Go To Vista Del Mar may be right up your alley. If not, well you’re gonna hate this movie.

Written and starring Kristen Wiig and Annie Mumolo, the premise is simple. Two mid-western, middle-aged women named Barb (Mumolo) and Star (Wiig), just fired from their mundane jobs and thrown out of their friend group, decide to go on a vacation to a Florida resort. However, if you were expecting something grounded in reality like Wiig and Mumolo’s previous writing venture Bridesmaids, think again.

Over the top, the whole thing feels very Zoolander meets Wet Hot American Summer. Wiig plays numerous characters in the production, there’s an evil stylized super villain, and comedically, there’s not a straight man in the cast. Jokes are layered and out of no-where. There’s a talking crab. They got the “real Tommy Bahama.” There are more than a few lines that will be quoted by comedy aficionados for years to come. Needless to say Barb and Star Go To Vista Del Mar is a wonderfully absurd masterpiece that is a cult classic in the making. It’s silly. It’s smart. It’s a little dumb – the trifecta of the perfect comedy.

Surprisingly Jamie Dornan, known for playing Christian Gray in the Fifty Shades of Gray series, is delightful as a romantically desperate henchman wanting to be loved. Playing perfectly off Wiig’s characters, Dornan gives us something we’ve never seen before from him, a comedic lead. If this is the way his career is going after the god-awful Wild Mountain Thyme, I will watch everything he does in the future.

In his first narrative feature, director Josh Greenbaum, seems to have everything under control. Overall, he lets Mumolo and Wiig do their own thing and if jokes don’t land visually, there’s about six more being hurled your way. However, the film’s last twenty minutes could’ve been rained in as the over the top antics start to wear around the eighty-five minute mark.

At its heart, Barb and Star Go To Vista Del Mar is a story of friendship, and while its outrageously smart and wonderfully dumb at the same time, the film’s magic lies with Mumolo and Wiig’s Barb and Star. With brilliant chemistry, the two women play comedic tennis with each line that comes out of their mouths. You want them to be your aunts and their friends at the same time. Sure the whole movie is super over-exaggerated, but when you’re with your best friend, life feels bigger and better. Here’s hoping we don’t have to wait another ten years for another film from this duo.

You can watch Barb and Star Go To Vista Del Mar on-demand. Watch the trailer below.