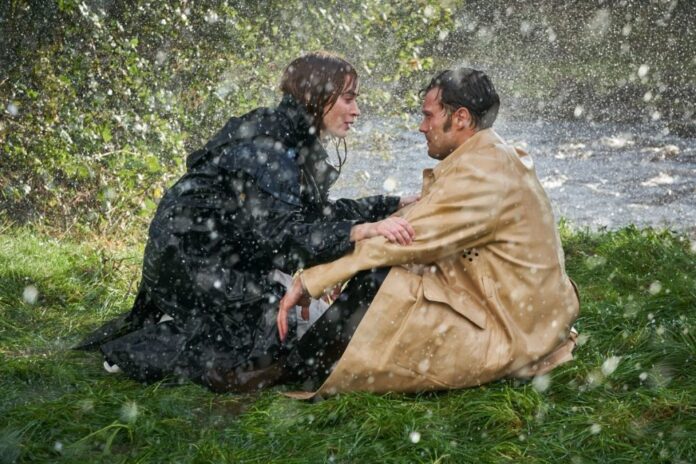 So many cliches. So many awful Irish accents, including one from a genuine Irishman. John Patrick Shanley’s Wild Mountain Thyme, an adaptation of his own stageplay, is a mess of dodgy Irish sayings, stereotypes, pipe-smoking old coots, potato-eating laddies and feisty-but-lonely lassies. It’s corny and definitely reductive, but there’s also something undeniably charming about a simple love story set in the rolling Irish hillside, at least when Emily Blunt is one of those who has been besotted by passion.

The iconic Christopher Walken is patriarch of the Reilly clan, who hopes to pass down the family farm when he dies. However, he doesn’t see his son Anthony (Jamie Dornan) as the top option. Instead, he chooses his American nephew, Adam (Jon Hamm), who is a “Kelly” as we’re often told, a businessman who will probably just sell the land or turn it into a parking lot or something. Meanwhile, a love triangle forms with Anthony’s longtime best friend and literal girl next door, Rosemary Muldoon (Blunt), a horseback riding, chain-smoking firecracker who takes no shite from any man.

A comedy of family legacy, country values, reluctant-in-love Irishmen and eager-for-love Irishwomen, Wild Mountain Thyme is emerald-colored earnestness so broad it could pass for a parody skit. It joins a long list of questionable American rom-coms (Leap Year being the worst) that peddle so much paddywhackery as there are marshmallows in a bowl of Lucky Charms.  The awful accents alone are worth the price of admission, with Walken in particular sounding like he’s playing one of his mob characters in the middle of an ethnic diatribe. Blunt doesn’t fare so well in this regard, either, but Dornan, who actually is Irish, must’ve spent too much in the Red Room because his attempts are torturous at best.

And yet, Wild Mountain Thyme will be harmless to anyone who doesn’t have a cultural reason to be offended by it. Beyond a deep appreciation these characters hold for family and friends, there’s also a love for the old ways of doing things; the grit that comes from a lifetime of hard, back-breaking work and the appreciation of building something with one’s own hands. The contrast between Anthony and Adam couldn’t be starker. The latter arrives in-country, rolling up to a family gathering in a rented Rolls Royce just to impress the simple folk. He then whisks Rosemary away to New York City, and shocker of all shockers, she’s stunned by the contemporary big city and wonders if she should continue experiencing the world.

Filmed in West Ireland’s County Mayo, Wild Mountain Thyme makes tremendous use of the earthy locales, gorgeous clifftops, and flowing hills. It doesn’t quite have the same sturdy, blue-collar aura as The Commitments or any film in The Barrytown Trilogy, but again, this is Ireland for the mass general audience not for those who actually live there. Shanley is Irish-American, and perhaps it’s a good idea to keep that in mind. His idea of what Ireland is might be different and he’s welcome to that.

Blunt barely holds together this sugary nonsense with a pot of gold’s worth of swooning melodrama. Her performance is much like the movie itself, a welcome escape from the seriousness and awfulness of the world around us. She’s having fun, singing Irish songs and throwing herself at an overmatched Dornan. Without her, Wild Mountain Thyme would be quite tough to endure, no matter where you are from.