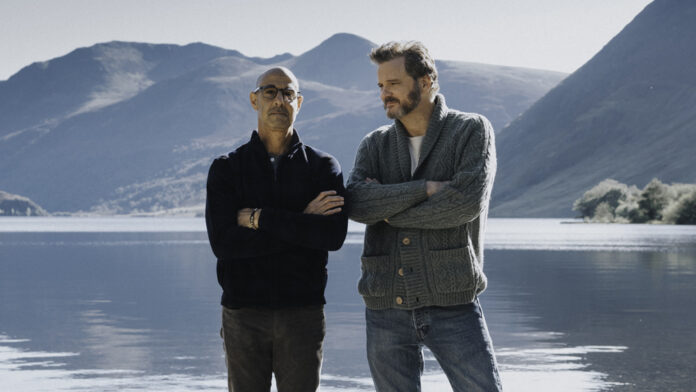 I love a good “contained movie.” A film where the plot starts and ends over a short period time often has the greatest emotional impact on an audience, yet is not used nearly enough by filmmakers. Harry Macqueen, writer and director of Supernova, utilizes the narrative device to tell one of the most moving and relatable stories of the year, creating one of the most remarkable films about ordinary life. Knockout performances by Colin Firth and Stanley Tucci don’t hurt the film either.

Firth and Tucci play Sam and Tusker, a long time couple embarking on a road trip across England to attend Sam’s piano performance. Throughout their journey they reconnect, visit old friends and come to face the reality of Tusker’s dementia. It should be a given that Colin Firth and Stanley Tucci give outstanding performances. Tucci is layered, covering his character’s fears and insecurities with a sense of humor. Firth gives a more outward emotive performance. Needless to say, they work off each other brilliantly, making you question why this is their first time playing a couple. Their dynamic is enthralling, drawing you in and enticing you to watch them for hours.

Harry Macqueen’s dialogue could feel too obvious or on the nose, with two lesser actors. Firth and Tucci’s performances, along with Macqueen’s direction, take away any sense of cliché the film may have.  Funny and nuanced when it needs to be, Macqueen tells a layered story simply and to its essence. A joy to watch, Supernova knows exactly what it needs to be to create the biggest cinematic impact with the viewer.

I would be remised as a millennial film critic if I did not point out that Firth and Tucci do not identify as gay. However, I’m also of the belief that an actor should not have to state every sexual encounter that they’ve had in order to play a gay man. With a script that is layered and three dimensional (this is where James Corden’s casting with The Prom failed) and actors playing against stereotypes, Supernova plays past labels and hits something more important.

Even though the film centers on a  gay couple, it’s about so much more than that. First of all seeing a gay couple in their 50s is a revolutionary act within itself. Media often doesn’t show older gay couples going through the trauma of life. Because of the AIDS crisis in the 80s, we’ve lost an entire generation of people that should have been depicted on screen. By showing aging LGBTQ couples dealing with universal subject matter, we see something beautiful and groundbreaking.

The more radical viewpoint Supernova takes on is medically assisted suicide. Never before has a film been so empathetic towards the cause. Despite your personal views on the topic, Tucci and Firth navigate the subject with evocative tenderness and understanding. Ability to connect with their audience ultimately helps the audience connected to the subject matter, showing the human side to medically assisted suicide.

Overall, Supernova is a quiet yet groundbreaking piece of filmmaking, cutting past the fluff and saccharine dialogue normally found in dramas about life altering illnesses. Whether it will succeed in a tough Oscar season remains to be seen, but if you are looking for a finely-crafted, touching story with a sense of humor, Supernova is the answer you’re looking for.

Supernova is available on demand now. Watch the trailer below.