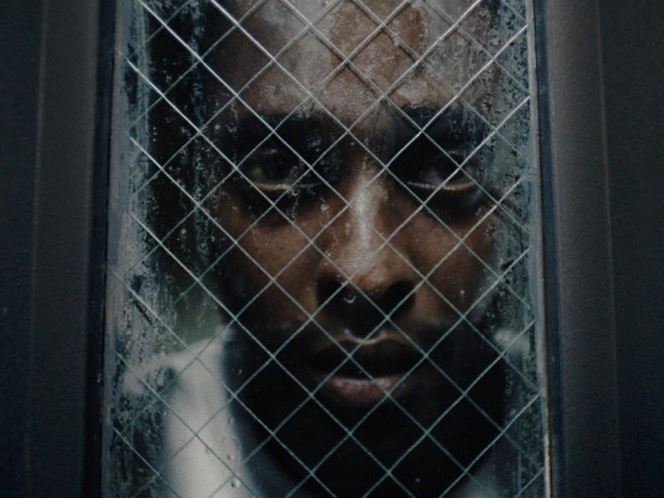 As social beings, we need to interact with our fellow human beings. Now when we have been convicted of a crime, that right has somewhat diminished as those convicted then have to serve a prison sentence. In even stronger cases, when a prisoner is deemed unfit to interact with the general prison population, they are reprimanded to solitary confinement: where they are isolated to their own cell, away from others. Now, on paper, solitary confinement sounds like a necessity and not so bad. It’s where the “worst of the worst” have to go in order to ensure the safety of other inmates as well as prison staff, but does it really help the inmate? In his directorial debut, Aaron Fjellman directed and co-wrote Caged to explore the notion of solitary confinement

Psychologist Dr. Harlow Reid (Edi Gathegi) is imprisoned for the murder of his wife Amber (Angela Sarafyan) when Caged first starts. Despite being found guilty and now serving a life sentence, Harlow maintains his innocence. Unfortunately, Harlow is not being able to get along with others and after being dumped by his lawyers finds himself sent to solitary confinement. When he first arrives there, it’s no big deal. Despite seeing other inmates having lost their grip on reality, it doesn’t seem to phase him. Not that it’ll be a breeze, but it’s assumed that he’ll be able to tough it out.

Slowly but surely, this proves not to be the case as he slowly but surely starts to lose his mind. In addition to the isolation, all that’s around him are other prisoners also going through the wringer (who he can only hear their cries of anguish through the walls) and sadistic prison guard Officer Sacks (Melora Hardin of The Office fame being an even bigger heel than Janet ever was for Michael Scott), who’s making it her life’s mission to torture Harlow into committing suicide. If he wants out of solitary, all he has to do is make a confession to Warden Perez (Tony Amendola) and enroll in a specialized rehabilitation program. As much as Harlow wants to get out of the hell that he’s in, he maintains his innocence and doesn’t want to compromise his convictions in regards to his innocence.

This leads Harlow to some very dark places as his sanity slowly starts to unravel. Kudos to Fjellman for some impressive visuals and some genuine jump-scares as Harlow hallucinates dead faces all around him, especially a zombified version of his wife Amber, which tortures him constantly. While his mind is unravelling, the audience is also treated to a Rashomon effect flashback to piece together exactly what happened that lead to Amber’s death. Did Harlow really kill his wife and is in denial, or did he get the raw end of a charge being a black man whose white wife died last seen with him? Until the end of Caged, we are left to guess what really happened as Harlow continues to be an unreliable narrator as the film progresses.

Because this is a film based within the realm of solitary confinement, this really is the Edi Gathegi show. Gathegi is a very capable actor who consistently delivers performance-wise, and Caged is no different. With his performance in Princess of the Row and now Caged, Gathegi is two for two in delivering outstanding performances lately. Even when it seems like he might have killed his wife, he’s still very much a sympathetic character. Unfortunately, Angela Sarafyan doesn’t get much to do as Harlow’s wife Amanda, except just die and be a plot device, but that’s really not her fault and more on the writing. Melora Hardin as the sadistic prison guard also is surprising in the film as she oozes just the right amount of terribleness that makes you really wish Harlow would snap and take her out to get some much-needed revenge on her.

While the ending is a little predictable (and ends very abruptly) as it neatly wraps all the plot points up, Caged is still a very interesting film and helps orient the audience to how it feels to be in solitary confinement for more than 200 days, which is deemed as torture by the United Nations if in solitary for more than 15 days. The writing at the end of the film tells the audience that this happens to up to one-third of prisoners, and most need psychological help in the aftermath to help nail down the message of the problems of forced isolation, even for those in prison.