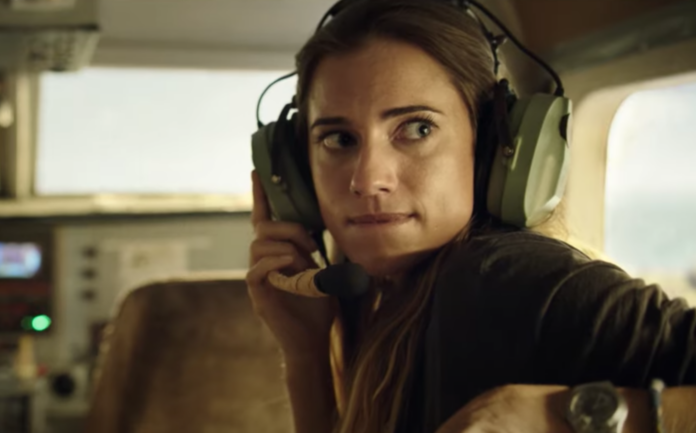 What’s the worst thing that could happen when you’re flying in a plane? Turn to your left and realize Liam Neeson is on board? No. Obviously, a plane crash. But before that; the nightmare scenario is the death of the pilot. If you’re lucky there’s a co-pilot ready to go. However, in the contained thriller Horizon Line, the passengers aren’t quite so lucky and have to figure out very quickly how to stay in the air.

Starring Allison Williams, Alexander Dreymon, and Keith David, the story follows ex-lovers flying in a single-engine plane over the ocean when, you guessed it, the pilot dies of a heart attack. With fuel dwindling, a nasty storm on the horizon, and nobody to help, they must work together to get the plane on the ground safely.

While I would LOVE IT if the great Keith David was sticking around for a while, it looks like he isn’t long for this movie. Dammit.

The film is directed by Mikael Marcimain from a script by 10 Cloverfield Lane duo Josh Campbell and Matthew Stuecken. Claustrophobic thrillers are sorta their bag and this could be pretty good.

Horizon Line was made available on VOD today, so go check it out.

From the creators of 10 Cloverfield Lane and The Shallows, HORIZON LINE is a thrilling survival story about two former lovers, Sara (Allison Williams) and Jackson (Alexander Dreymon) who discover new altitudes of fear aboard a single-engine Cessna plane. It was supposed to be a routine and casual 99-minute flight to their friend’s tropical island wedding. But within minutes after takeoff, their pilot suffers a fatal heart attack, leaving Sara and Jackson with no idea where they are, no comms, and no clue how to land the plane. With nothing but miles of ocean and sky in every direction, and a terrifying storm that’s about to envelop them, Sara and Jackson have only one shot – and there’s no going back.