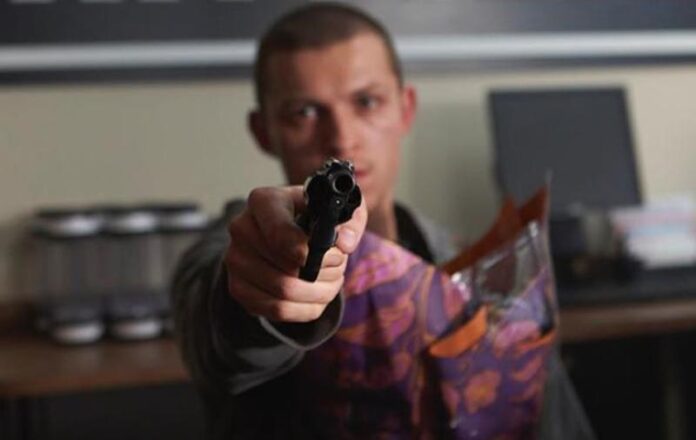 Making a good, effective movie poster is hard work. It has to be, which is why so many just roll over and give us some Photoshopped nonsense half the time. But a really good poster communicates what the movie is, what it’s about, the style, and is easily eye-catching because you want to attract people in theater lobbies and online. Well, whoever came up with the new one-sheet for Cherry, the Russo Brothers film starring Tom Holland, got only part of the job right.

So the new poster for Cherry debuted in Variety today, as part of the For Your Consideration ads for critics groups. They might want critics like yours truly to vote for it to be Best Film, but that’s kinda hard to do when…well, we’re distracted by whatever that title treatment is…

This is an appallingly bad poster, good lord pic.twitter.com/YYAss1Ot0W

What’s that? Tom Holland starring in…CHUD? CHEERK? What is that shit? If someone didn’t already know this was for Cherry they’d have no damn clue.

The response to this wack shit was instant, and it obviously reached the ears of the Russos because they put out an updated version a few hours later that looks much better.

An updated version of the FYC poster for #Cherry starring Tom Holland. pic.twitter.com/MD1DGH1S7O

You know what they say, though. You never get a second chance to make a first impression.

Still, this does sound like a really good flick. The Russos’ followup to Avengers: Endgame is based on the true story of Nico Walker, an army medic with PTSD who develops an opioid addiction and turns to robbing banks to feed the habit. The film gets a limited awards-qualifying run on February 26th 2021, and then it will debut on Apple TV+ on March 12th.