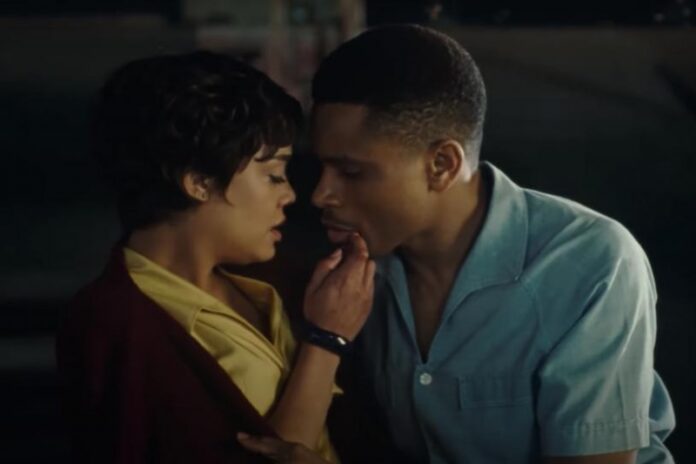 The arrival of Eugene Ashe’s film Sylvie’s Love heralds the return of something we rarely get to see now, if ever: the African-American period romance. With its silky smooth aesthetics evoking Hollywood love stories from the ’60s, and swoon-worthy production design capturing Harlem of the same era, Ashe presents a sweeping melodrama about two professional people of color, with passions that stretch beyond the physical, making for a film that should make fans of Golden Age nostalgia salivate.

Adding to the eye candy are the film’s stars, Tessa Thompson as the titular Sylvie, the brilliant, ambitious daughter of a record store owner and an etiquette instructor; and ex-NFL pro-turned-rising star actor Nnamdi Asomugha as Robert, a sax player looking to make it big in the jazz scene. But before he can ever get there he’s just a guy in need of a job, drawn to the Help Wanted sign that puts him in Sylvie’s orbit. She’s engaged, but the guy is one of those who doesn’t inspire, and is always destined to lose out to a more charismatic fellow. Robert has charisma. It isn’t long before he and Sylvie are taking strolls through Harlem’s streets under the summer sky. He fell for her immediately upon seeing her dance to Bobby Charles’ “See You Later, Alligator”; she while watching him perform in a club. Ashe focuses on Sylvie’s face and you can see in the eyes the moment it happens; the director not only capturing the sensuality of the moment but trusting in his star to pull it off.

Familiar turns of the genre soon intercede into this summer of merrymaking.The two are separated by a great distance and for a long stretch, but not without Sylvie leaving a major secret unrevealed. Years later, Sylvie and Robert are reunited, by chance or fate, in very different places in their lives. She’s now married, with a child, and having attained the television producer job she always wanted. Robert has returned from a European tour and his once-promising career now somewhat up in the air. The spark between them is still there, though. Of course it is.

With loving, gorgeous detail Ashe and cinematographer Declan Quinn inject some classic era Hollywood mystique into a Black romance, making it feel larger in scope despite the obviously-modest means. There’s a certain charm to the colorful artificiality of the backlots from which this was shot, but at times, especially when the pace draws to a crawl, when it becomes a distraction. However, this is rectified during the explorations of Sylvie and Robert’s careers, such as the TV soundstage with her not-at-all-glamorous producer gig on a cooking show (with Wendi Mclendon-Covey as its firecracker host). Soulful looks into the New York jazz culture put us right in the smoke and music filled rooms. No matter where Robert and Sylvie are, Phoenix Mellow’s flawless costume design has these two lovebirds popping off the screen. Music plays a big role, as well, triggering flashbacks to happier, more innocent times.

On that note, Sylvie’s Love is a film about Black people in the turbulent ’50s and ’60s, and racial tensions are part of that equation.  What Ashe doesn’t do is make it the totality of the story, or even a driving factor. It’s more like a component of the uncertainty that surrounds Sylvie and Robert’s soap opera lives, but this is not a movie driven by prejudice or fear. There’s something refreshing to that, to be able to focus simply on the lovers and their goals.

Chemistry takes a long time for Thompson and Asomugha to build, and for a long stretch she carries virtually all of the dramatic weight. Thompson is more than capable, but in some early exchanges with her co-star she’s simply not getting much in return and the entire film suffers for it. The vast experience gap is glaring, but I don’t want it to seem like I’m piling on Asomugha who has been excellent in a couple of films already, including Sundance award-winner Crown Heights. He just doesn’t provide enough to flesh out Robert as a complete character in the way Thompson does with Sylvie. While the two eventually find a rhythm in the movie’s second half, what we ultimately come away with is that Sylvie is the one that makes Robert interesting.

A swooning, well-crafted film, Sylvie’s Love spotlights people of color in a genre that has rarely been their own. With breathtaking setpieces, costumes, and the undeniable screen presence of Thompson and Asomugha, it makes a good case that these love stories should be everyone’s domain from here on out.