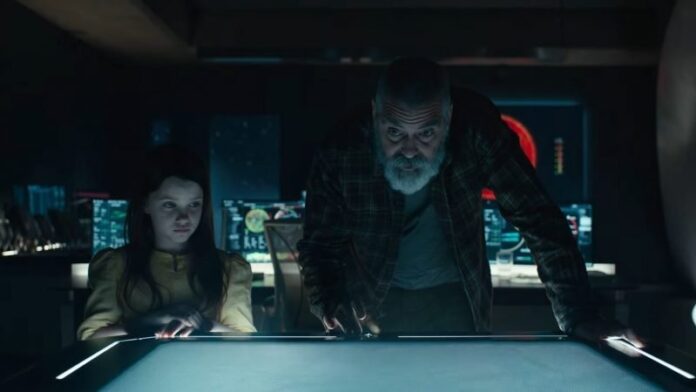 I know they never really went away, but does it feel like every movie nowadays deals with a global catastrophe that wipes out humanity? The specter of COVID-19 hangs large over George Clooney’s new sci-fi drama, The Midnight Sky, and with so many films covering post-apocalyptic territory it’s best that his film avoids showing the devastating effects. Instead, his film focuses on the emotional impact, the absence of those who are lost, the pain of those who remain and of those who have yet to find out the worst. It’s another ambitious, tonally off-kilter effort from Clooney who has been struggling with that issue since 2014’s Monuments Men.

An epic-bearded, dead-eyed Clooney plays Augustine, a lonely scientist at an Arctic research facility in the year 2049. He’s about all that remains of humanity after “The Event”, some undefined global disaster that looks like a bunch of swirling red clouds. Augustine has resigned himself to live out his last days there, in hopes of contacting the crew of the Aether, astronauts sent into space two years earlier to find a habitable world to move to. He plans to warn them about the uninhabitable planet that awaits them, but all of his plans are thrown topsy-turvy by the discovery of Iris (Caoilinn Springall), a young girl who stayed behind after the evacuation.

Iris doesn’t speak, either by choice or out of fear, but she’s still a lot for the grief-stricken Augustine. He doesn’t want to care for her, “I’m the wrong guy”, he tells her at one point, but is resigned to it despite there being a mankind-saving mission at stake.

The Midnight Sky is basically two separate stories, neither reaching quite the emotional pitch Clooney was aiming for. One is essentially a two-hander between Augustine and Iris, as they make the dangerous trek to another station where they can contact the returning astronauts.

The other involves the crew of the Aether:  the ship’s commander, Adewole (David Oyelowo), his pregnant girlfriend Sully (Felicity Jones), Maya (Tiffany Boone), Sanchez (Demián Bichir), and Mitchell (Kyle Chandler). To say they don’t have much personality would be an understatement, and the screenplay offers little in the way of getting to know them. Instead, we’re resigned to the fact that Sully’s impending birth is the only thing we’re going to get that comes close, which is a shame because there’s some interesting chemistry working between Jones and Oyelowo. The birth is meant to be this glimmering ray of hope for a fading people but it’s never really presented that way, mainly because the people aboard the ship are unaware of how dire things are back home. We’re meant to feel something that Clooney fails to adequately show us.

Technically, the outer space scenes are the most impressive, occasionally resembling the scope and thrills of Gravity, a film Clooney obviously knows quite well.  Something about Alexandre Desplat’s score doesn’t quite work, though, as if he too was having a tough time getting a grip on the mood Clooney was after.

Augustine’s story doesn’t really make sense, either. Without giving too much away, his desperate mission only starts to come together after a big final act revelation, but before that his plan is just bizarre. If you can separate yourself from that, Clooney’s performance as Augustine is quite good, and there are genuine thrills as Augustine and Iris face the dangerous terrain, brutal climate, and predators that stand in the way. This journey is one packed with deep regret and pain, which Clooney’s Augustine carries heavy on his shoulders and in his soulless eyes.

It’s amazing how Clooney’s 2002 role in Solaris continues to be a waypoint for so much of his filmmaking career. The Midnight Sky is similarly introspective and somber, while also heavy in romanticized flashbacks that distract rather than inform us to Augustine’s grim resignation of his fate. As Clooney’s ambitions as a director grow, he seems to be missing the humanity and energy of his initial works, and let’s hope he manages to find that again soon.

The Midnight Sky is in select theaters now, and will hit Netflix on December 23rd.