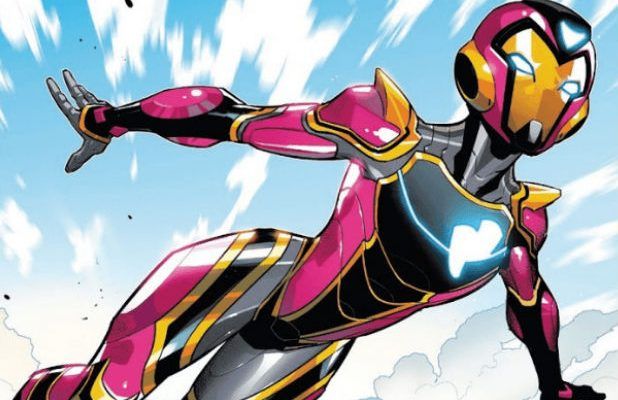 Marvel Studios’ Kevin Feige is going to be a very busy man. Along with all of the movies coming up, he’s also got ten new Marvel shows coming to Disney+, and we’ve just learned about a handful of them: Secret Invasion, Ironheart, Armor Wars, and I Am Groot.

The Secret Invasion series is the one that has been rumored about for a while, and will be led by Samuel L. Jackson as Nick Fury. He’ll be joined by Ben Mendelsohn who returns as Talos, the Skrull who befriended Fury during Captain Marvel. Talos would go on to pose as Fury on Earth while the former SHIELD leader took a much-needed break. Assuming the series follows the comic book storyline, Fury will be hunting down shapeshifting Skrulls that have infiltrated in positions of power.

Samuel L. Jackson is back as Nick Fury and Ben Mendelsohn from Captain Marvel returns as the Skrull Talos in Marvel Studios' Original Series Secret Invasion. Coming to #DisneyPlus. pic.twitter.com/AuInHMuBRW

Ironheart will star young actress Dominique Thorne as Riri Williams, an African-American girl with a genius-level intellect who designs a suit of armor that rivals Tony Stark’s. I can’t wait to hear more about this one. Riri is one of the coolest of Marvel’s new wave of heroes.

Coming soon to #DisneyPlus, Dominique Thorne is genius inventor Riri Williams in Ironheart, an Original Series about the creator of the most advanced suit of armor since Iron Man. pic.twitter.com/VB94VyPr9e

Who would’ve thought that War Machine might have his own Marvel series? Well, he does, with Don Cheadle suiting up for Armor Wars, about what happens when Tony Stark’s vaunted technology falls into the wrong hands. I guess Rhodey is the only one who can stop it?

Don Cheadle returns as James Rhodes aka War Machine in Armor Wars, an Original Series coming to #DisneyPlus. A classic Marvel story about Tony Stark’s worst fear coming true: what happens when his tech falls into the wrong hands? pic.twitter.com/K6M0q9mcNM

And finally, I Am Groot is a series of shorts featuring everybody’s favorite Baby Groot! The tiny tree tyke will encounter several new and unusual characters, hopefully one of them will be Cosmo the Spacedog who was last glimpsed in Guardians of the Galaxy.

Finally, She-Hulk has been confirmed with Tatiana Maslany set for the title role. Maslany had thrown some doubt whether she would star, but it’s all a done deal now. Also confirmed to be joining her is Mark Ruffalo as the original Hulk, and surprisingly, Tim Roth is coming back as The Abomination. He hasn’t been seen since 2008’s The Incredible Hulk.  Can William Hurt’s General Thunderbolt Ross be far behind?

She-Hulk arrives to the MCU! Tatiana Maslany will portray Jennifer Walters/She-Hulk and Tim Roth returns as the Abomination and Hulk himself, Mark Ruffalo, will appear in the series. Directed Kat Coiro and Anu Valia, She-Hulk is coming to #DisneyPlus pic.twitter.com/z4OlQJhrlr