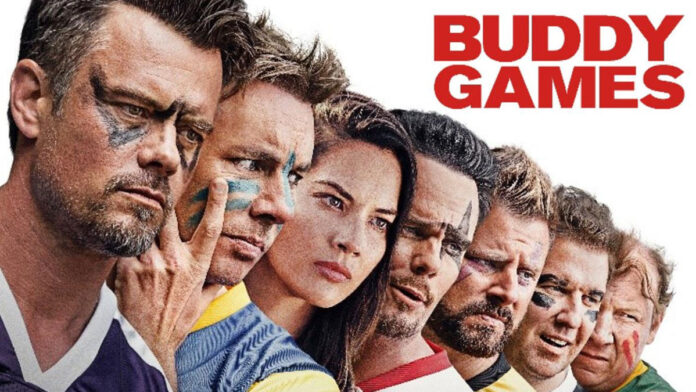 Buddy Games, the new comedy co-written, directed, and starring Josh Duhamel, is an unabashedly juvenile look at how guys can be when they get together with their childhood/high school/college friends. That’s all the disclaimer I’m going to give because that should paint a pretty clear picture. Buddy Games follows Bob “Bobfather” (Duhamel) and his buddies as they reignite their annual competition aptly called, the Buddy Games. The film opens showing the end of the last Buddy Games and consequently, the reason they went on hiatus, a tragic (but not NOT funny) mishap involving a paintball and a scrotum. 5 years later the Bobfather is married to a beautiful woman named Tiffany (Olivia Munn) and Shelly (Dan Bakkedahl), the scrotal victim previously mentioned, is in a deep depression. To keep him from his suicidal tendencies his mom reaches out to Bob and asks him to restart the games. As plots like this dictate, Bob has plenty of cash so when the rest of the group (Dax Shepard, Nick Swardson, and Kevin Dillon to name a few) is reluctant to reignite the juvenile and painful event he puts up a $150,000-dollar prize to the winner. If you’re seeing similarities to 2018’s Tag, The Hangover, or any Judd Apatow flick you’re not far off. 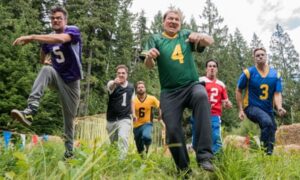 Right off the break, if you’re sensitive to frat humor this isn’t for you. If you’re still unsure, the first 10 minutes should remove any doubt on whether this is your kind of movie or not. It may not make me the most sensitive guy in the world, but I’ve always liked a good dick and fart joke movie. Of course, Buddy Games adds semen, vomit, and other unspeakable things to their repertoire of joke material. I’m not going to defend it’s choices, not every joke and lands and some are a bit overboard even for my tastes but I would be lying if I said I didn’t have a good time watching this. Truth be told, these movies connect because a lot of guys can relate, anyone that has lifelong friends, or even old college buddies knows that when you get back together the clock rewinds and any of the maturity you’ve gained since you last hung out is nowhere to be found. Of course, Buddy Games takes that concept and turns it to 11 making their group of friends do things that none of us would consider for a laugh. The worst of which is perennially picked-upon Nick Swardson whose character Bender is the go-to for the flick’s most debauched moments, something to which Swardson is no stranger.

While the film does it’s best to mimic the gross-out bro gags of the classics that came before it, and manages to succeed in some places, where they truly miss is the sentiment. Characters in these films NEED to have redeeming emotional journeys, otherwise it’s all just low-brow humor which is fine for a quick laugh but not much more. Sadly, Buddy Games sets up the feels but never fully commits to delivering them. You see, guy groups for all our cup-checking shenanigans and deep cutting insults tend to have a brotherly love that can’t be broken. There’s a delicate balance you have to find to show this on-screen convincedly, and to put it bluntly they fell off the high wire. While that’s going to keep Buddy Games from entering the “memorable” category it’s still perfectly fine for a laugh, and if that’s not enough I’ll just remind you that it’s got Olivia Munn (although not nearly enough).

Buddy Games is rated R for strong crude sexual content and language throughout, some graphic nudity, drug use and brief violence