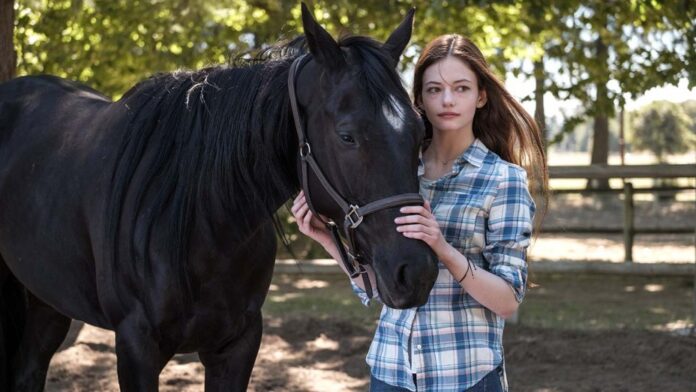 Was Black Beauty always so…grim? Perhaps it was. Admittedly, Anna Sewell’s 1877 novel wasn’t high on my must-read list as a kid, and it’s possible I always just assumed it was about nothing but a kid learning to ride his favorite mustang. But there is a lot more at play here in Ashley Avis’ adaptation for Disney+, not the least of which is an outcry against animal cruelty that hits pretty heavy-handed, but this touching tale of two untamed souls coming together still holds many charms, including Kate Winslet as the title character.

Winslet voices Black Beauty and, if that confuses you, it’s just one of a handful of changes in this updated version of the story. Both Beauty, the wild mustang stolen from her family and shipped to the American West, and so is the young rider whose spirit would match her own. That girl is Jo, played by Twilight and The Nutcracker actress Mackenzie Foy, who has similarly been torn away from her family by tragedy. Game of Thrones’ Iain Glen is the kind-hearted horse trainer who ends up caring for Beauty as well as Jo, despite both of them being fiercely against the idea.

Of course, that fiery spirit is what Beauty and Jo find in one another, with Winslet voicing the horse’s inner monologue through earnest, emotional narration. As long as the perspective stays with Beauty, the film moves along nicely, but gets muddled when the focus shifts to Jo, the resentment and sadness she carries, and at least one fledgling romance with a handsome, rich boy who shares her love of animals. 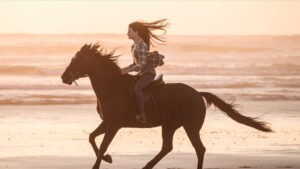 Coincidence fuels the episodic nature of the story, as Beauty’s well-being depends on the people she comes in contact with. Mostly, the humans she meets are horrible people, and the film gets extra gloomy as she’s bounced around from owner to owner, further away from Jo. Sewell’s novel was a plea for better treatment of animals and that message carries through in a contemporary setting, including the cruelty faced by horses bred for the show circuit. There’s a nice bit about the use of the word “breaking” to describe the taming of horses, with Jo suggesting an alternative that doesn’t like the crushing of one’s spirit. The worst of the owners are played, as expected, in broad strokes. People are either all good or all evil, which fits with the simple messaging of a family-friendly Disney movie. It doesn’t make for the most nuanced story about animal welfare but then you probably aren’t looking for that in Black Beauty, anyway.

The final act wades fairly deep into the dark side, however, with Beauty facing one heartless master after another. Winslet’s voiceover is especially powerful here, as she gives voice to the horse’s wishes to be reunited with Jo once more. Kids may find this stretch tough to endure, as I’m sure many parents will, as well, since it comes during a series of half-realized subplots that are only about Beauty’s pain. When Avis does finally get around to parting the clouds and letting the light back in Beauty’s life, you realize how inert the film was for a long while, and how ready you were to see her ride off into the sunset and the storybook happiness we wish for all creatures.