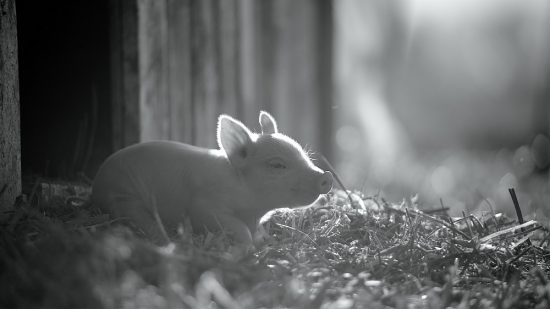 At this year’s Critics Choice Awards, our guest of honor and Best Actor winner Joaquin Phoenix put his stamp on the event by organizing a plant-based menu, something that has never been done there before. Of course, Phoenix would go on to talk about animal rights not only during out show, but at the Oscars, as well. And now Phoenix continues to be a champion for the cause as exec-producer of the groundbreaking documentary, Gunda, which offers an unprecedented look at the lives of animals and the impact humans have on them.

While we’ve seen plenty of nature docs that follow certain animals in their natural environments, Gunda takes a deeply intimate look at the lives of specific farm animals, including a momma pig and a one-legged chicken, shot in gorgeous black and white. The film was co-written and directed by Viktor Kosakovskiy, and is the next chapter in a trilogy preceded by Aquarela.

Having premiered at Berlin earlier this year, Gunda earned high praise from Phoenix and Inherent Vice director Paul Thomas Anderson. Neon also took notice and quickly snapped up the rights for release this awards season, beginning with a week-long virtual run in L.A. and N.Y. on December 11th. It’ll then open in theaters in 2021.

SYNOPSIS: Experiential cinema in its purest form, ‘Gunda’ chronicles the unfiltered lives of a mother pig, a flock of chickens, and a herd of cows with masterful intimacy. Using stark, transcendent black and white cinematography and the farm’s ambient soundtrack, master director Victor Kossakovsky invites the audience to slow down and experience life as his subjects do, taking in their world with a magical patience and an otherworldly perspective. ‘Gunda’ asks us to meditate on the mystery of animal consciousness, and reckon with the role humanity plays in it.”

‘Clerk’ Trailer: Documentary On The Rise Of Kevin Smith To Debut At SXSW