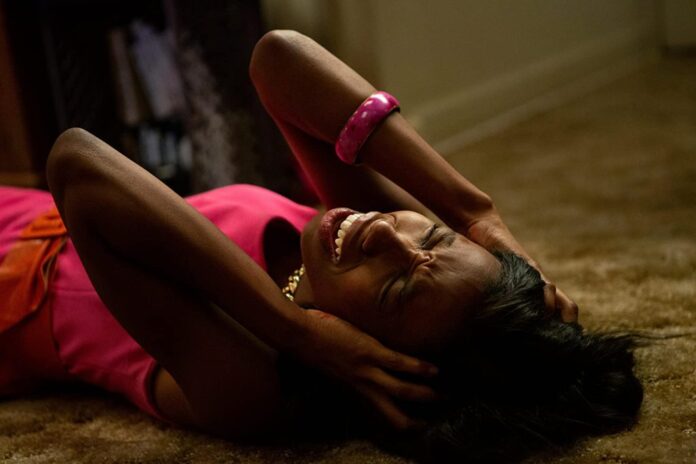 *NOTE: This is a reprint of my review from the Sundance Film Festival. Bad Hair opens on Hulu on October 23rd.*

When a black woman tells you not to mess with her hair, she isn’t playing around. While often presented as a joke, the struggles of black women with their hair has bred enough real-life horror stories that it’s a surprise there haven’t been more movies about them prior to Bad Hair. Written and directed by Justin Simien, the film  shows his growth as a filmmaker following his confrontational comedy debut, Dear White People. Weaving together (pun absolutely intended) a genuinely scary body horror with sensitive cultural commentary on black hair care is no easy feat, but Simien pulls it off even as the film could use a bit of a haircut.

Simien was the toast of Park City a few years ago with Dear White People, an in-your-face look at race in a post-Obama America. Like that film, Bad Hair shows Simien is a dude with a lot to say, perhaps too much. It’s easy to get tangled up in the web Simien spins and can’t seem to wrap up, but at least you’ll have fun trying to sort it all out. First of all, he chose wisely setting the film in the late ’80s  during the New Jack Swing era of R&B music.  It was a time when every black household was tuned into Black Entertainment Television, listening to the sounds of Teddy Riley. Every guy had a high-top fade and every woman needed long, flowing smooth locks.

Into this hairstyle-conscious world is Anna (Elle Lorraine), who suffered a traumatic scalp burn as a child when trying to relax her nappy ‘do. Anna works at the BET-esque television network, Culture, as an executive assistant, but she longs to be a TV personality. Unfortunately, her rise up the ranks is threatened by a corporate takeover. Her longtime boss is out, replaced by ex-supermodel Zora (actual ex-supermodel and cover girl Vanessa Williams) who wants her stars to have a certain look…and Anna definitely doesn’t fit. But Anna has good ideas, which Zora is eager to steal for herself.  And if Anna wants to stick around, well, she really needs to do something about that hair.

What follows is a weird concoction of black folk tales and hair care superstition, as mysterious hairstylist Virgie (Laverne Cox) offers to give Anna the look she’s been dying for. Simien paints a hideous, blood-soaked picture of the damage black women do to themselves to fit their perception of beautiful. Flesh rends and squishes, hooks cut deep into the skin as Virgie gives Anna such a painful weave it knocks the poor girl unconscious.  “You’re not the first to pass out”, Virgie says as if it’s a badge of honor. In a twisted way, some black women would see it like that, too. But the pain was worth it. Anna’s new style immediately turns heads, both for good and for bad. She moves up quickly at work, becoming a right-hand woman to Zora, however the unwanted attention she gets from unsavory men is a danger she’s never had to face. The new ‘do has another big drawback. It’s alive, has a thirst for blood, and it isn’t long before the bodies start stacking up around Anna.

Simien has found a niche exploring the cultural divide within different groups of black people, in much the same way Spike Lee’s School Daze saw dark-skinned blacks battle light-skinned. While there’s a little bit of Cronenberg-style body horror as inspiration, especially in the cheesy visuals of stringy hair strangling unsuspecting victims, Simien may have also drawn from the campy sub-genre of South Korean hair horrors like 2005’s The Wig.

Bad Hair works best when Simien leans into the goofier aspects; like Jay Pharaoh as Culture’s dopey Gumby-haired host, and Lena Waithe’s channeling of rapper/VJ Heather B as Anna’s workplace pal Brook-Lynne (get it?).  The deeper layers, such as  the societal pressures that force black people to compete with one another for acceptance, are vast and almost too weighty for a movie about a possessed head of hair. Not entirely, though. While Simien keeps Anna’s struggle going for far too long with a a ton of final-act exposition and repetitive hair vs. hair action, his ambition to use genre to tackle broader issues is why he’s a director to always keep a close watch on. He’s talking about things no other filmmaker is talking about, having to comb through a bit of a mess is a small price to pay.