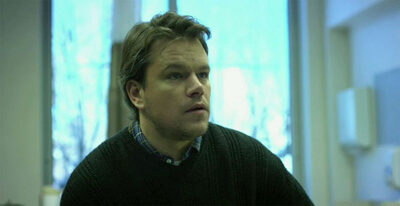 The working relationship between Matt Damon and Steven Soderbergh goes back a long way and encompasses a lot more than the Ocean’s Eleven trilogy. They can probably call one another up to help out on just about any project, and that’s what’s happening now as Damon joins Soderbergh’s upcoming HBO Max film, No Sudden Move.

Deadline reports Damon will have a role in Soderbergh’s star-studded crime film with the generic title, No Sudden Move. Set in 1950s Detroit, it follows a group of small-time criminals hired to steal a document, only to have the job go belly-up and their search for the truth made more dangerous by a racially-torn city. The script is by Bill & Ted veteran Ed Solomon.

Damon joins a ridiculous cast that includes Don Cheadle, Benicio Del Toro, David Harbour, Amy Seimetz, Jon Hamm, Ray Liotta, Kieran Culkin, Brendan Fraser, Noah Jupe, Bill Duke, Frankie Shaw, and Julia Fox. It isn’t likely that Damon has a big role as he’s only filming for two days, so maybe another of his many memorable cameos? The best of which will ALWAYS be in Eurotrip, of course.