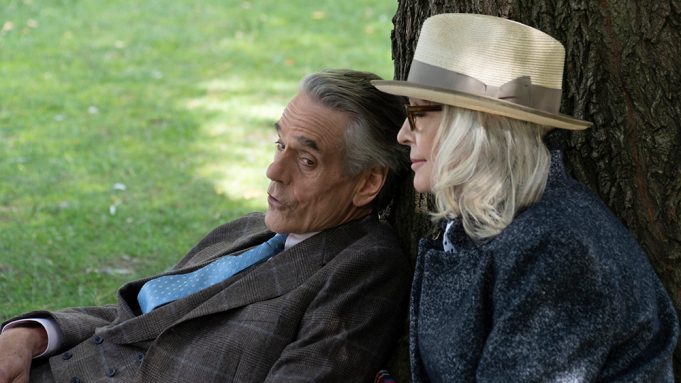 Just some of the films that fall under the resume of Love, Weddings & Other Disasters director Dennis Dugan:  Growns Ups 1 & 2, Jack & Jill (*shudders at the memory*), Saving Silverman, and it doesn’t really get better. He may seem like an unusual choice to direct a romantic comedy starring two legendary screen vets like Diane Keaton and Jeremy Irons, but that’s until you see the trailer and realize that those with age and experience on their side are prone to sitcom hijinks, too.

Directed and written by Dugan, Love, Weddings & Other Disasters finds Keaton and Irons navigating a rom-com in which he plays an arrogant caterer and she is his blind date. No, literally she’s a blind woman, and it seems Dugan is going to run all of the blind jokes he can well into the ground. Meanwhile, Taken and Lost star Maggie Grace plays a wedding planner known as the “Wedding Trasher”. You can guess how good things are going for her.

Others in the cast include Andrew Bachelor (who also has a role in this week’s rom-com Holidate), Diego Boneta, Jesse McCartney, JinJoo Lee, and Veronica Ferres.

Obviously, this isn’t high on my list of things to see, but I’ll always make allowances for Irons, Keaton, and Grace.

Love, Weddings & Other Disasters opens in theaters and VOD on December 4th.

SYNOPSIS: Maggie Grace (“Taken”) and Oscar® winners Diane Keaton and Jeremy Irons lead this warmhearted romantic comedy. With a couple’s impending wedding as the backdrop, “Love, Weddings & Other Disasters” weaves multiple storylines as it follows the search for love by a colorful group of characters, including an inexperienced wedding planner (Grace) nicknamed “The Wedding Trasher”; a fussy celebrity caterer (Irons); his blind date (Keaton); and a tour-bus guide (Andrew Bachelor) looking for his Cinderella. How their lives and loves intersect is half the fun in this film that proves romance is alive and well… and as crazy as ever!