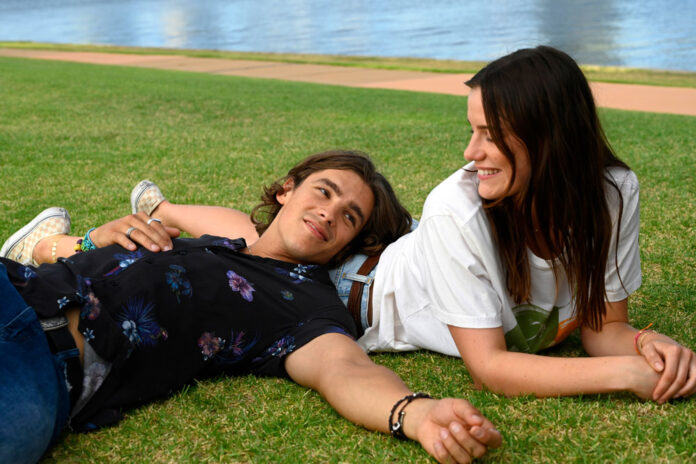 It seems these days that the standard romantic-comedy has been so overdone that new sub-genres are emerging. Take the new film, director Luke Eve’s I Met A Girl, a sweet rom-com that fits into the ‘mental/physical health rom-com’ sub-genre occupied by films like The Fault in Our Stars or It’s Kind Of A Funny Story. The rewards of this genre are multiplied by the odds the subjects are facing but the risks are multiplied as well, it can be VERY hard work to make sure a mental or physical illness is portrayed correctly on screen, with the right level of respect given to what’s going on with the characters without making everything dreadfully serious. By and large, I Met A Girl accomplishes this task. Devon is a schizophrenic whose life spirals out of control after he stops medicating so that he can be more “present” in life, specifically at his brother’s wedding. He’s got all of the pieces to make his life a happy one but can’t seem to put them together without the medicine that will, he thinks, take him out of feeling life itself. The main problem is that when he’s off his medicine he has two voices in his head pushing him to both hate himself and take risks that he shouldn’t. One such incident sees him going off a roof only to end up being cared for by a beautiful and almost too perfect woman named Lucy. When Lucy doesn’t show up to meet his brother (who is now convinced Lucy is a delusion) Devon heads out to find her and prove his perfect woman is real.

If this sounds like a movie that could easily go off into the “way too sweet and convenient” then you’re not alone, I was expecting just that. However, the film does a few things that keep it from falling into those tropes and you end up with an enjoyable if not somewhat predictable film. The main danger with a film like this is its portrayal of a man who’s a possible danger to himself and others when off his meds going off and having a life-changing adventure. Admirably the film makes it clear that going pill-free wasn’t a great idea and has real consequences. Brenton Thwaites, who plays Devon, does well with the role and excels in showing the truth of Devon’s manic episodes, as well as both his hope and wonder at life off meds and his terror at the numbing life he’ll have to face when on them. Lily Sullivan (Lucy) uses the role to make herself known to the international audience, it’s clear we will see more of her on the world stage very soon, there’s an ease with which she delivers her lines which lends to the dreamy nature of her character and really plays into the “is she or isn’t she real” aspect of it all. I mentioned the movie was predictable but I have to give credit where credits due and shine a light on the places where this isn’t the case…specifically in the one place where the happy-ever-after was crafted and waiting for them. The filmmakers take a route you won’t be expecting but manage to deliver it in a satisfying way that keeps you feeling fulfilled if not slightly surprised.

DC Universe’s ‘Titans’ Trailer: Robin Saying “F*ck Batman” Is All Anyone Will Remember About It