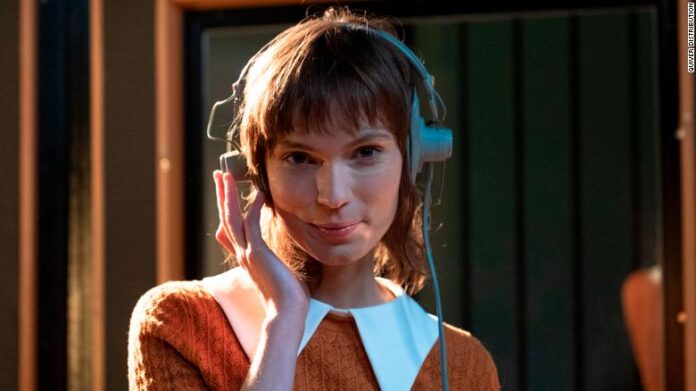 If you have been politically active at all in the last four years, been to marches, or even seen one on tv, chances are you’ve seen a woman in a pink knitted hat carrying a sign saying, “I am strong, I am invincible, I am woman.” Those lines come from pop crooner Helen Reddy’s 1971 hit ‘I Am Woman.’ “I am woman, hear me roar, In numbers too big to ignore,” became the anthem for second-wave feminists and the push for the passing of the Equal Rights Amendment. In the new film, I Am Woman, director Unjoo Moon and writer Emma Jensen, finally give us Helen’s untold story, from aspiring Australian singer and single mom trying to make it in America, to the creation of one of the sweetest and most polite protest songs, to the dissolution of Reddy’s troubled marriage.

Showing off her range is the film’s star, Tilda Cobham-Hervey. Previously playing a naive and sexually stunted young woman in last year’s captivating Burn, Cobham-Hervey completely switches gears playing Helen Reddy. She’s sweet and completely immersed in the story, wearing her heart on her sleeve. To put it simply, she’s dazzling. Sure, we’ve seen a character like Helen onscreen before, but Cobham plays her so freely, full of so much gumption, heart, and flaw, that you can’t help but root for her.

Playing Helen’s destructive partner, Jeff Wald, is American Horror Story’s and X-Men alum, Evan Peters. Instead of being the one-dimensional angry husband, Peter takes your expectations and stomps them into oblivion. His performance layered, you fall in love with his passion and drive, right-side Cobham-Hervey’s Helen. Often times in stories of broken relationships, we immediately see the outcome, rather than why the victim fell in love, to begin with. Peters and Moon keep in mind that this is a real living person and refreshingly decide to treat him as a multifaceted and complicated player in Helen’s life journey. He may be the antagonist of Helen’s story but to paint him as just that wouldn’t be the truth.

Though Moon’s passion for this project seeps through, the film does feel like a typical biopic, leaning into a schmaltzy, corny, or overly sincere tone. However, if you have ever listened to Reddy’s music, you know that schmaltzy and sincere are kind of her thing. It’s unclear whether or not Moon intended the script’s sentiment to emulate its inspiration, but if you can get past the corniness, I Am Woman works overall.

Working in the film’s favor is its cinematographer, Dion Beebe. Known for working on almost every film that director Rob Marshall has ever done (Mary Poppins Returns, Into The Woods, Chicago, Nine), Beebe’s brings a clean, thoughtful, and enticing aesthetic to Helen’s story. Combining character with filmmaking, Moon and Beebe, who won an Oscar for Memoirs of a Geisha, elevate Helen’s story visually, bringing sophistication to it rather than melodrama.

Though most of I Am Woman’s parts work harmoniously, it’s at times cliché script weighs the film down. As the current woman’s movement merges with other types of social justice reform, such as racial, educational, and economic, Helen Reddy’s story still seems relevant. It’s one that’s is full of triumph and contradiction, a story about a song that inspired a movement but also documents the singer’s dealing with misogyny within her own marriage. Despite appearing saccharine, I Am Woman overall hits the right note.

You can rent I Am Woman on Amazon Prime here. Watch the trailer below.