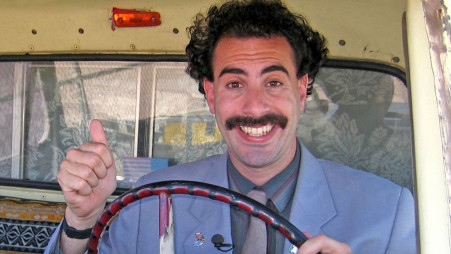 While Sacha Baron Cohen has grown beyond situational humor to become quite the dramatic actor (see The Spy and The Trial of the Chicago 7), he’ll always be known as Borat. That’ll never go away. But the movie he played that unforgettable character in went by the lengthy title of Borat: Cultural Learnings of America for Make Benefit Glorious Nation of Kazakhstan. Turns out the sequel is going to be just as much of a mouthful, and we’ll probably just be calling it Borat 2.

As part of its official filing with the Writers Guild of America, the Cohen’s upcoming sequel is titled Borat: Gift of Pornographic Monkey to Vice Premiere Mikhael Pence to Make Benefit Recently Diminished Nation of Kazakhstan.

Oh. I’m sure Mike Pence will have a great sense of humor about that.

An entire army of writers took a pen to this one, too. Sacha Baron Cohen, Anthony Hines, Peter Baynham, and Dan Mazer, all writers on the first film, joined by Dan Swimer, Erica Rivinoja, Jena Friedman, and Lee Kern, with 30 Rock writer Nina Pedrad contributing to the story.

That title would suggest that illicit sex is going to play a big role, which could mean rumors the story will explore Donald Trump’s ties to Jeffrey Epstein are true. It’s also reached the point that Borat is too famous, and has to go deep cover to pull off his tricks, which should be fun.

No details on when the film will arrive, who is directing, or who will release it. But we do know that screenings have already taken place for select groups, so we should hear something soon.