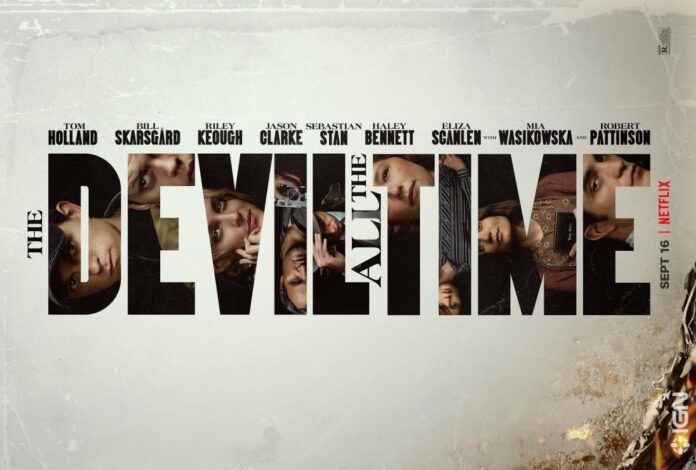 I know Tenet is the movie everybody is thinking about for September, but for me it’s all about The Devil All the Time. Netflix has assembled the best cast of the year for the adaptation of Donald Ray Pollock’s novel, a multigenerational tale about a young man from Ohio and the sinister characters who enter into his orbit. With Tom Holland, Robert Pattinson, Jason Clarke, Riley Keough, Eliza Scanlen, Sebastian Stan, Bill Skarsgård, Mia Wasikowska, Harry Melling, and Haley Bennett starring, the smartest thing to do is put them front and center because who doesn’t want to see that?

That’s exactly what Netflix has done with the movie’s first poster, which features all of the headliners. A trailer should be dropping fairly soon, and this is a good way to get us ready for it. The film is directed by Antonio Campos, who is best known for a trio of acclaimed indie dramas:  Afterschool, Simon Killer, and Christine.

SYNOPSIS: In Knockemstiff, Ohio and its neighboring backwoods, sinister characters — an unholy preacher (Robert Pattinson), twisted couple (Jason Clarke and Riley Keough), and crooked sheriff (Sebastian Stan) — converge around young Arvin Russell (Tom Holland) as he fights the evil forces that threaten him and his family. Spanning the time between World War II and the Vietnam war, director Antonio Campos’ THE DEVIL ALL THE TIME renders a seductive and horrific landscape that pits the just against the corrupted.