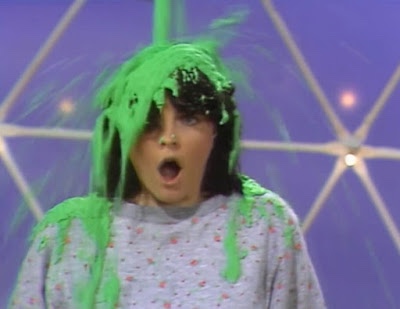 “Kids all over the world said, ‘I get to be me and if I’m really lucky, maybe I get to be slimed.’” For over 41 years, that statement has embodied the audience that watched Nickelodeon. The channel pioneered children’s television beyond the worlds of PBS or Mister Rogers neighborhood and was the first television network completely dedicated to kids. Their mission to create content kids can relate to is now documented in the new film, The Orange Years.

If you are hoping The Orange Years oozes childhood joy, then you are in for a treat. Covering Nick’s beginnings and early shows like Salute Your Shorts, You Can’t Do That on Television, Double Dare and The Adventures of Pete and Pete, directors Scott Barber and Adam Sweeney do a great job picking out and exploring the shows and elements that made Nick programming so vital to the millennial child. With interviews from Nick stars like Kenan Thompson, Melissa Joan Hart, Kel Mitchell, Larisa Oleynik, and Drake Bell not only talking about their shows but their favorite Nick shows, The Orange Years truly transports you back in time.

The doc focuses a huge amount on its female leader Gerry Laybourne, the secret to the network’s success. In fact, a whole multitude of female creators and executives are highlighted. This is noted in the network’s programming, using shows like Clarissa Explains It All and The Secret World of Alex Mack to create female-centered content that drew all genders. The Orange Years succeeds in showing how progressive the network was and therefore different and groundbreaking compared to its competitors like Disney Channel or Cartoon Network.

While The Orange Years succeeds in bringing the sentimentality, the 90-minute film spends the majority of its time just telling you about various Nick shows. After the seventh or eighth show, it becomes tedious. Would this have worked better as a YouTube series, with 7 to 11 minute videos? Maybe.

Class Action Park, a 2020 HBO Max documentary that also invokes childhood nostalgia while recounting what made a theme park fun and traumatic, has very much the same feel as The Orange Years down to its animated sequences. However, Class Action Park uses nostalgia to make a larger point about the unintentionally traumatic culture of the 80s while simultaneously talking about the park’s attractions and history. The Orange Years doesn’t have some implicit point it’s trying to make about the generation who watched Nick in the early 90s. Instead, it sort of presents its history with a “wasn’t this thing great?” kind of attitude.

Ultimately, The Orange Years is a documentary for those in their late 20s, 30s, and early 40s looking to relive their favorite tv moments from their childhoods. It may be a bit arduous for the causal Nick viewer though so keep your socially distanced viewing parties restricted to Nick superfans.

The Orange Years is available on VOD. Watch the trailer below.