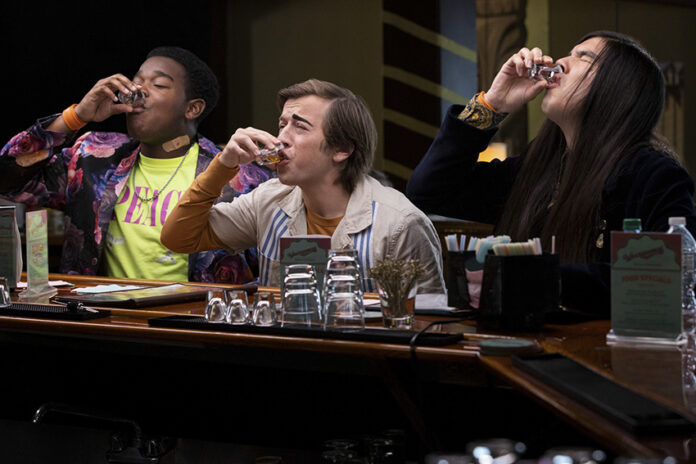 The brilliance of Blumhouse’s The Purge franchise isn’t that it imagines a country where all violence crime is legal for a single day of the year, it’s how that premise is used to explore timely societal issues. And yes, there is a great deal of killing, as well. So what happens when you remove the violence and replace it with illegal drugs and alcohol? In the case of Hulu comedy The Binge, you get a run-of-the-mill Superbad knockoff with occasional bouts of intoxicated brilliance.

The setup is literally the same as The Purge. That much isn’t an exaggeration. When intoxication and drug abuse reach epidemic levels, the government delcares an outright prohibition on all of it. Except for one day, in which they become legal again for anyone over the age of 18. That means high school seniors await the day like it’s drunk Christmas, all except college-bound dork Griffin (Skyler Gisondo) who doesn’t want to risk blowing his future, so decides to hang with the parentals for a wild night of root beer floats. His best bud Dags (Dexter Darden) has other ideas, though. Not only does he drug their parents to get out of the root beer binge, he’s scoped out a plan to hit an epic annual Binge rager and become “legendary” in a series of intense drinking games such as Alligator Doughnut (which involves putting a donut on a live gator) and Cocaine Scarface which…well, it’s a lot like it sounds.

If The Binge feels eerily similar to Booksmart there’s reason for that. The “one wild party night” has been done to death, including in Olivia Wilde’s hilarious comedy from last year. But also because Gisondo and co-star Eduardo Franco, who plays their long-haired schizophrenic pal Andrew, were both supporting players in that film in very similar roles. Director Jeremy Garelik and writer Jordan VanDina mine from a veritable army of teen comedies centered around parties, sex, and drugs, but is relatively tame by comparison. Certainly, it doesn’t go into the untamed extremes of a film like Project X, but plays it softly down the middle. Jokes mostly focus on Griffin’s frequent misunderstandings with his childhood crush Lena (Grace Van Dien) that make him look like a total dweeb. He texts her “Virgo”, auto-corrected to “virgin”, har har! Another recurring gag is Dags’ pathetic party mobile, a glorified rickshaw that proves too embarrassing for the girl he has sights set on.

On board in a role that is like an extension of his Old School/Swingers glory days is Vince Vaughn as Principal Carlson, who happens to be Lena’s father. He’s also one of the parents who most tries to warn kids away from The Binge, despite his own inappropriate actions throughout that have you hoping for the Vaughn of yore to re-emerge. While the cast is mostly forgettable because their characters fit neatly into a familiar box, Vaughn is clearly having a blast-from-the-past moment and loving it. He gets his moment in the sun, and that’s all that need be said about that.

The Binge is directed by Jeremy Garelick, who gave Vaughn one of his defining roles in 2006’s The Break-Up. This is his first feature since The Wedding Ringer, and his taste in humor remains firmly middle-brow as ever, thanks to screenwriter Jordan VanDina.  There’s little here that seeks to offend, which also means there’s little here that pushes the boundaries of this overused genre. So we get the typical storyline of two best friends facing a future apart, with one going away to university and the other stuck going nowhere. But that angle isn’t really embraced at all, it just sort of falls away as the night’s insanity takes off, never to return.  Moments of inspiration are rare, but one that is truly great is an impromptu musical number, “We’re Gonna Get High”, set to a fast food-induced delirium that would make Harold & Kumar proud.

If only The Binge had indulged in a few more big swings, or swigs in this case, it might’ve been a more memorable entry into the raunchy teen comedy field. As it is, there may be enough to quench your thirst, but I would recommend getting blitzed out of your mind first.