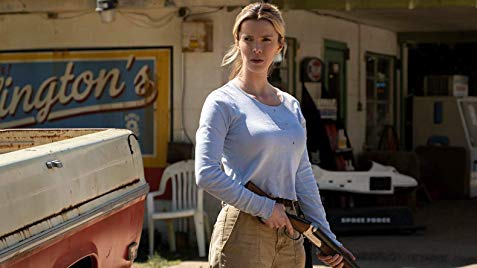 “Liberal Hollywood is Racist at the highest level, and with great Anger and Hate! They like to call themselves ‘Elite,’ but they are not Elite. In fact, it is often the people that they so strongly oppose that are actually the Elite. The movie coming out is made in order … to inflame and cause chaos. They create their own violence, and then try to blame others. They are the true Racists, and are very bad for our Country!”

The above tweet was by, you guessed it, Donald Trump when he first learned of the controversial film The Hunt. As is typical for him, he knew nothing of what he spoke but used the country’s political polarization as a weapon for his own benefit. It was largely due to his inflammatory rhetoric, and that of others deliberately misunderstanding the film, that saw it pulled from release until now. Well, what was true then is true now. The Hunt is snarky, provocative, offensive, super-violent, and takes out its politically-incorrect anger on both sides of the ideological spectrum. Right wing, left wing, everybody gets skewered in Craig Zobel and Damon Lindelof’s The Hunger Games-style murder spree.

For angry conservatives bent on hating The Hunt as some sort of liberal wet dream, you’re not even half right. The initial premise is true that it centers on a group of liberal elites who hunt down “deplorables”, even using that term explicitly in the opening minutes, as a means of getting payback against the Trumpers out there. But it’s also clear soon after who the real villains are, although it’s hard to say anybody can be considered a hero. The progressives are a snobbish bunch, flaunting their cultured bonafides with arrogance while arguing over the right terminology to use when describing their quarry. They are everything those on the extreme right want to believe liberals to be and worse.

On the other hand, the prey are Hannity-watching, Alex Jones-citing conspiracy nuts who will anything they want to believe is true into reality. They’re the types who think Pizza Gate is real, but climate change is a hoax perpetrated by angry scientists or something. The Hunt lives in the extremes when, for the most part, reality exists somewhere in the middle. Figure that out and you’ll have a good time watching both sides slaughter one another, and feel free to pick a side if you wish. I sure did, and you most definitely will, too. I’d be lying if I said it wasn’t enjoyable to watch one soon-to-be victim, a gun nut spouting about the seven guns he owns, has his entire belief system (Second Amendment! God-given right!) shattered before meeting his grisly fate. Meanwhile, a polar bear treads a melting glacier in the climate change video playing in the background. The man’s killers argue about whether it’s okay to call African-Americans “black” yet, and who makes that determination. It’s all silly, wildly over-the-top, and indicative of our hyper-polarized culture that it sounds so legit.

The Hunt makes some interesting choices narratively, as well. Initial promos leaned heavy on the dystopian aspects, but also on the star power. Emma Roberts, Ike Barinholtz, Hilary Swank, and Justin Hartley were featured extensively, but the movie doesn’t belong to them. Hell, some of them don’t survive the first five minutes. The film is owned by GLOW star Betty Gilpin as Crystal, who is interesting because she doesn’t exist in the extremes…unless you count the extreme violence she inflicts on her progressive foes. Crystal is unusually good at killing people, and only part of the reason is the complete ineptitude of her victims. From the moment the first head is blown off in a spray of crimson, The Hunt wears its gore proudly and everybody has an equal opportunity to die.

Ultimately, the best thing about The Hunt is that it dares to tread dangerous political territory and do it in a way that is entertaining, fun, and will piss off both Democrats and Republicans. They must be doing something right.