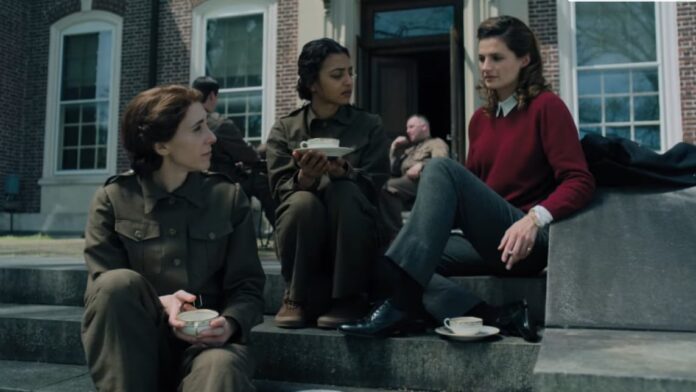 The contributions of women to the Allies’ efforts during WWII are mostly seen as support: wives, nurses, staff, etc. Rare is the film that depicts their actions which put them directly in the path of Hitler’s attack. A Call to Spy focuses on the women of the Special Operations Executive (SOE), spies tasked by Winston Churchill to attack the Nazi regime from the shadows.

Stana Katic stars as Vera Atkins, a key figure in the SOE who helped recruit and train women to build a revolution against Hitler’s regime. Sarah Megan Thomas (Equity) plays Virginia Hall, an American who went on to become one of the SOE’s most decorated agents. Radhika Apte (The Wedding Guest) is Muslim pacifist Noor Inayat Khan, a Gandhi follower whose reported last words, “Liberté” gave the movie its original title. Also in the cast are Linus Roche (Mandy), and Rossif Sutherland (Possessor).

Behind the camera is Lydia Dean Pilcher, a producer on films such as Amelia, Iron Jawed Angels and Queen of Katwe. She’s often focused on the actions of women that helped shape history. She made her directorial debut with Radium Girls, a film that was to come out this year but has since been delayed.

A Call to Spy hits theaters and VOD on October 2nd.

SYNOPSIS: In the beginning of WWII, with Britain becoming desperate, Churchill orders his new spy agency–SOE– to recruit and train women as spies. Their daunting mission: conduct sabotage and build a resistance. SOE’s “spymistress,” Vera Atkins (Stana Katic of CASTLE), recruits two unusual candidates: Virginia Hall (Sarah Megan Thomas of EQUITY), an ambitious American with a wooden leg, and Noor Inayat Khan (Radhika Apte of SACRED GAMES), a Muslim pacifist. Together, these women help to undermine the Nazi regime in France, leaving an unmistakable legacy in their wake. Inspired by true stories, this original screenplay draws on SOE, OSS, and CIA files. This is the untold story about the personal sacrifice of courageous individuals who put their lives on the line to fight for freedom.