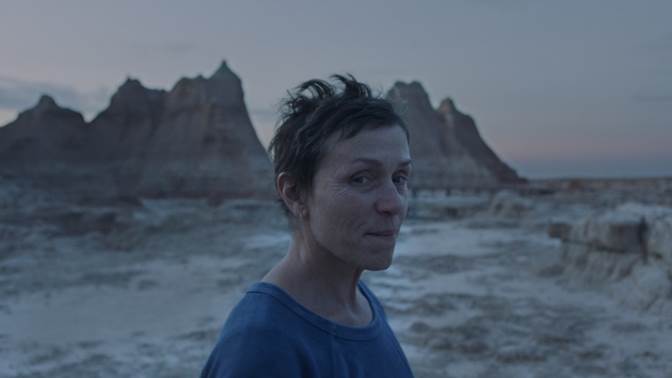 Searchlight Pictures is rolling out the red carpet for Chloe Zhao’s third feature, Nomadland. The anticipated film, which follows Zhao’s breakout debut The Rider and her upcoming Marvel movie The Eternals, will have its world premiere simultaneously at the Toronto International Film Festival and the Venice Film Festival on September 11th. They will be accompanied by virtual introductions by producer, writer, editor, and director Zhao, and producer/star Frances McDormand.

Nomadland stars Oscar-winner Frances McDormand as Fern, a woman who, after the economic collapse of a company town in rural Nevada, packs her van and sets off on the road exploring a life outside of conventional society as a modern-day nomad. The film features real nomads Linda May, Swankie, and Bob Wells as Fern’s mentors in her journey through the American West. The film also stars Emmy-winner and Golden Globe nominee David Strathairn. Zhao adapted Nomadland from the acclaimed book by  journalist Jessica Bruder.

In addition, Searchlight announced a series of global screenings to commemorate the release of Nomadland. While Telluride had to cancel this year’s event due to COVID-19, a special  “Telluride from Los Angeles” drive-in screening in Southern California will be held later in the evening, featuring in-person appearances by Zhao and McDormand. Also, the New York Film Festival has announced Nomadland as its Centerpiece Selection, leading to the movie’s domestic release this fall and subsequent international rollout.

This is a big deal, and shows Disney (Searchlight’s parent company) has serious Oscar hopes on this one. As well they should given Zhao and McDormand’s track records, along with a premise that is specially tuned to the hardship many are facing right now.