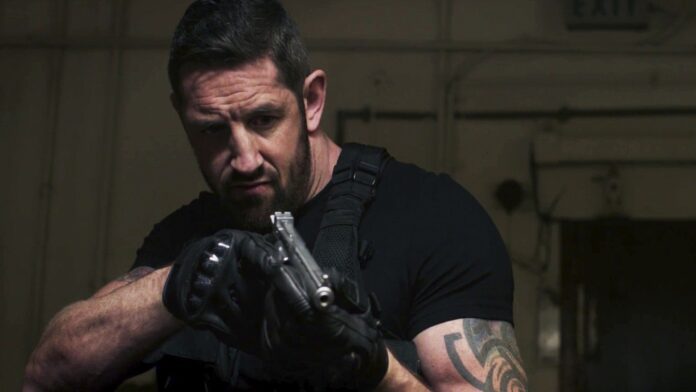 I am Vengeance was an old school kick-in-the-face for genre fans, and for most people probably their introduction to Stu “Bad News Barrett” Bennett, ex-WWE superstar. If so, it was a Hell of an intro, as Stu showed he’s a natural in front of the camera and one of the most credible ass-kickers on the screen. Now he’s back as John Gold in the sequel, I Am Vengeance: Retaliation, which pairs him up with Vinnie Jones for what is basically an 80-minute fight scene.

If that sounds like it’s up your alley, then I Am Vengeance: Retaliation won’t disappoint.  The plot has a Hitman’s Bodyguard feel to it, minus all of the dumb jokes, car chases, and gratuitous F-bombs. Ex-special forces soldier John Gold is tasked with bringing in Sean Teague (Jones), the man who betrayed him and his team years earlier. But Teague has his own goon squad out there trying to keep him safe, and a Molotov cocktail thrown into the mix is Katrina Durden as Jen Quaid, who wants revenge on Teague for killing her father. Escorting Teague to the federal prison where he’ll likely rot for eternity proves to be a difficult task.

This movie is chocked full of badass women who equal, and often surpass, the fighting skills of any dude they go up against. Durden’s Jen Quaid leaps and springs off the walls like a ninja, while Phoebe Robinson-Galvin packs a Hell of a punch as Gold’s right-hand lady, Kate Lynch. When Quaid and Lynch throwdown, it’s the highlight of the entire movie…right up until the moment they can break some skulls together.

At 80-minutes long, I Am Vengeance: Retaliation doesn’t dick around, and writer/director Ross Boyask keeps the pace brisk. Sure, the dialogue is corny as shit, and the bad guys have the aim of Imperial Stormtroopers, but you let that stuff go because this franchise clearly knows what it’s doing. Even so, with a vast number of characters all running around hitting or shooting at one another, it gets a little out of control and it seems Boyask loses track of them. Some end up standing around doing nothing at really odd times, letting people they were just trying to kill walk free for no apparent reason other than plot, and so forth. Your mileage may vary on how much that annoys you, but for me it was laughable the number of times Gold or his team are allowed to just skate unscathed when they should be dead.

Boyask deserves credit for keeping each fight totally free of CGI, and allowing his talented group of battlers to shine. The shootouts aren’t nearly as fun as when his characters resort to hand-to-hand combat, because that’s where everybody gets to show off their skills. Bennett is rock solid as John Gold. You believe he could legitimately destroy everybody in the room if he wanted to. From top to bottom, Boyask has put together a stellar group that I hope we can see put together again in another film. Along with Bennett, Jones, Durden, and Robinson-Galvin the cast is basically a stunt coordinator’s dream. There are some obvious limitations due to the budget, which Boyask tries to conceal to mixed effectiveness.  Basically, as long as the film stays away from car crashes and anything beyond people beating one another up, it’s all good. Less is definitely more.

All of that said, if you’ve got an itch for action that needs to be scratched, you could do a lot worse than I Am Vengeance: Retaliation. The previous film doesn’t need to have been seen to understand why Gold is beating everybody up. And there are some great showdowns between Bennett and Jones as these two hulking bruisers trade barbs and fists in equal measure.