Home News Disney Review: ‘Hamilton’The Room Where It Happened Is Your Living Room, Thanks To...
Facebook
Twitter 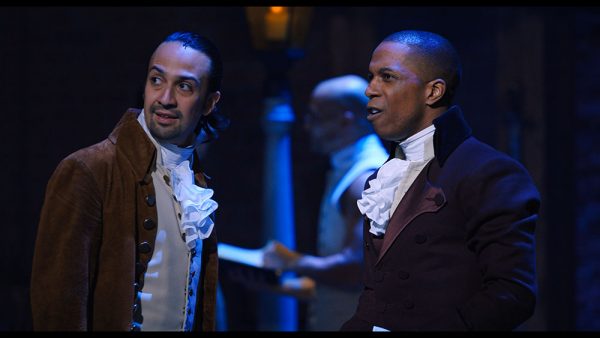 The room where it happened, it turns out, is in your living room. Disney spent a small fortune, enough cash to make Alexander Hamilton himself choke, to acquire the film rights to Lin-Manuel Miranda’s groundbreaking Hamilton, complete with the original Broadway cast, with a plan to drop it like a bomb into theaters next year. But the funny thing about pandemics, well…not that there’s anything really funny about them, but the interesting thing about them is the way they disrupt best laid plans. So Disney, being the opportunistic sorts that they are, decided to leap on this quarantine moment and release their Hamilton movie into homes on Disney+, just days after ending their trial pricing period.  Definitely NOT a coincidence. Other than Marvel or Star Wars what else promises to cause a surge in subscriptions like the greatest cultural phenomenon in most of our lifetimes, for less money than your friends spent to be there in person and take that stupid photo of the Playbill to plaster on their Facebook pages?

But this Hamilton isn’t a movie. That’s not a knock against it by any means. Filmed by director Thomas Kail at the Richards Rodgers Theater in New York City in June 2016, Hamilton is a blend of styles, fusing the cinematic with the stage to create a wholly different experience, and yet one that captures the energy of being there. Most of us are already familiar with it, whether we’ve seen it on Broadway or not. The catchy soundtrack has been beaten into our heads so much, and its verbiage a part of our daily slang. Having never seen the show in full before, I was taken by its courage, the verve, the sheer guts of Miranda’s vision. Nothing quite prepares you for the sight of rappin’, dancin’ Founding Fathers as people of color, a powerful expression of turning American history into a story for ALL of us to share. There’s also nothing that readies you for the first time Hamilton (played by Miranda) performs “My Shot” and all of its many refrains; there’s nothing that smacks you in the face quite like Jonathan Groff’s smarmy “You’ll Be Back” as King George.

If only all history lessons could be this cool. The story follows the political rise and tragic fall of Alexander Hamilton, his emergence on the New York scene, his part in establishing this country alongside George Washington (Christopher Jackson) in the Revolutionary War, his many squabbles with Thomas Jefferson (a gangsta leanin’ Daveed Diggs), his turbulent marriage to Eliza (Phillipa Soo), and of course, his love/hate relationship with ideological rival Aaron Burr (Leslie Odom Jr.). Someone should introduce legislation that all political debates be contested in rap battles as fierce as those between Jefferson and Hamilton, surrounded by a crowd of hyped on-lookers.

Hamilton is everything it was advertised to be and more. Even on the small screen, it makes you feel as if you’re watching greatness unfold. Nothing is ever going to take away from the unique quality that comes with truly being there, having paid your ticket, and taking in a performance that was different from the previous night and will be different the next. You can choose where to focus your attention, maybe on an actor who is particularly in tune with the crowd that night. Kail provides many different angles to provide a glimpse at Hamilton that you might miss seeing it live, but you are still at his mercy and that could take a little something away for a few viewers. But it bears repeating that Hamilton isn’t a true movie. Slowdowns, rewinds, and flashbacks occur but they are inventively recreated by Miranda and his amazing production team, giving the feel of cinema-quality effects when there are none.

Nothing can take away from the enormity of Hamilton, which breaks beyond the confines of the small screen. Whether you’re seeing it live or on film, the immediacy of it hits you, especially at this moment when protestors are in the streets and statues of white slave owners are being taken down everywhere. Kail manages to keep Hamilton feeling larger than life, capturing that exciting sensation of being there. Every moment demands your attention, and at 161-minutes that’s a tall order. It’s interesting, though, that a one-minute interlude is included when, unlike at a crowded theatrical performance, you can just hit pause for a quick bathroom break. There’s also a brief introduction by Miranda and Kail that feels slightly out-of-step and perfunctory, when it would’ve been better served as a bonus feature with greater time to put Hamilton in current context.

While it may not be as hot as it was a few years ago, Hamilton is just as meaningful and  more felicitous than ever. With nobody making their way to Broadway anytime soon, Disney has given us the next best thing. The real draw of Hamilton on Disney+ is that you’ll always and forever have a front row seat to a truly monumental, revolutionary piece of history.